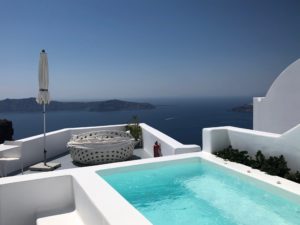 Among the top Imerovigli resorts, Grace Santorini must surely be one of the most unforgettable. This is the luxury hotel with the best view of Skaros, Santorini’s distinctive natural ‘sculpture’, as shown in the image above. Grace Santorini, like many of its neighbours, seems to cascade down Imerovigli’s cliff-face.  From villa 35, where the gal stayed, it is 52 steps up to the three feet-wide track that constitutes the ‘public walkway’, and a further 81 steps down to the lowest level of the property. Villa 35 was actually ideally placed as it was also two minutes’ walk to the gym, and a super boutique that has work from such local designers as Zeus-Aione, who made the pulled thread linen yukatas in each of the 21 rooms. 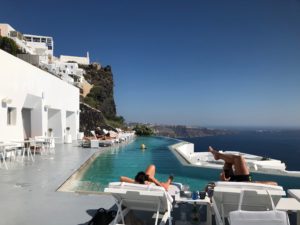 Many spend a lot of the day around the hotel’s infinity pool. Breakfast here, lunch here, dine here, either outside, at one side of the pool, or, when the weather suggests, go inside to the cool, cave-like interior.  Cleverly there are also two niches, like open-sided boxes set into the wall alongside the pool. Each ‘box’ holds a table for four, away from the searing sun, or a wind that can sometimes get just a bit annoying.  Between meals by the pool I spent a lot of time in my villa as it was so agreeable – see the video, below, With my own outdoor hot tub, 12 by eight feet and nicely warm,  and with all those steps up and down when I needed. 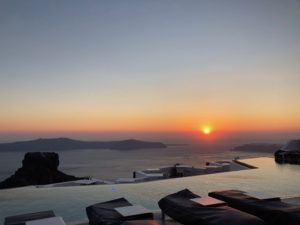 Sunset, from the pool

The GM of this place, George Vlachopoulos, is a brilliant creator.  Among the delights in my room was a memory box, with sand, and tomato jam, and other things to remember this place by (he also suggested I write down three things I really liked, for a memory capsule to personalise my next visit, but honestly I liked SO much I could not zero in on three).  Even on holiday, for instance, WiFi is indispensible, and here it was superb, and, even better, the Grace Santorini’s always-there IT specialist, whom I called George II, was so brilliant he sorted out lots of knotty problems.  He finished what he was doing just as the sun set.  Oh what a start to a memorable evening. 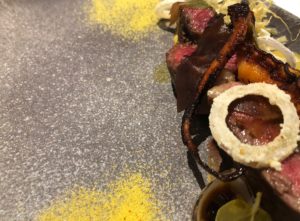 I dined with George I, and started with an aperitif of Aeyptiko Wild Ferment 2017. We talked luxury, which to George, who constantly refers to mentor James McBride, for whom he ran Nihi Sumba, includes all the senses, and consistency, with continual surprises.  I had surprises galore here.  Surf & Turf, according to chef Spyros Agios – who can, by the way, do halal and kosher – is lobster and water buffalo.  Many go for the five-course tasting menu, which can be paired, but I went à la carte, starting with an alternative Greek salad of smoked eel, avocado and sweet and sour boukovo sauce.  And then, after the surf and turf, which came with a spicy seaweed sauce, I walked a few steps back up to bed, revelling in the fact that all rooms at this unforgettable hotel have Intellipure dehumidifiers, just as many Americans now have at home. AND NOW SEE ROOM 35