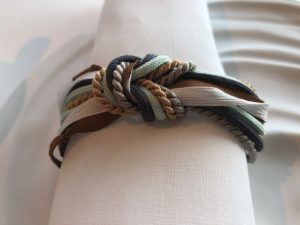 He has never worked anywhere outside his native Paris that has felt more like home than here in Tokyo, says Michel Chertouh, Regional GM Greater Tokyo and Okinawa for ANA InterContinental – to make the point, the gal asked him to pose, above, with a Tokyo-born colleague at the 824-room ANA InterContinental Tokyo, where he is based. He is a food man, through and through, and just as restaurants in France rely on highly skilled servers, who go on forever, complemented by a changing roster of youngsters, the same happens here. Sixty-five percent of the team at ANA InterContinental have been here at least 15 years, but millennials come, and millennials go. 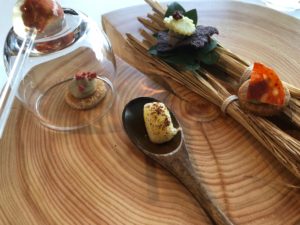 Canapés, on a sturdy board

And then there is attention to detail, and an inherent love of food. Obviously we had to lunch at the hotel’s Pierre Gagnaire, Tokyo (are you excited, asked the young lady above as I arrived for lunch). The 36th floor restaurant has widely-spaced crisp-linen tables given a burst of colour from soft-lavender velvet banquettes. Raynaud porcelain, with white china ‘seeds’ about six inches high, accompany linen napkins held with ties, as shown. The other diners, or rather lunchers, were groups of ladies-who-lunch, ages mid-20s up, in pairs up to groups of six. We ordered, and were each brought a canapé board, which fortunately was minutely explained by Raphael Avenier, from Lyon – see the video below. 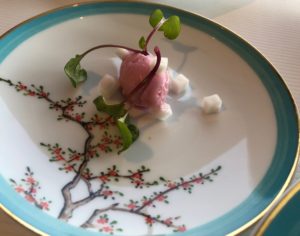 The menu, by Gagnaire protégé Yosuke Akasaka, seems to offer eight choices, Jardin marin, Legumes, La chasse, Homard blue, St Pierre and crab, Boeuf, Cochon, and Colvert. I was about to choose from the listed Legumes when the Raphael Avenier pointed out that choose Legumes and everything comes. Sure enough, I had Mount Fujita shiitake on a buckwheat pancake with parmesan cream; au feu of seasonal vegetables cooked in veal stock; satoimo (Japanese taro) galette with smoked paprika, broth with Paris button mushrooms, and a quarter-bite of red turnip ice cream. (I could have eaten four times this amount of food but, thinking like French or Japanese, I knew enough to be as good as a feast and I could have filled up with the three large breads, including Poilâne-type, we were each served, in china bowls.) 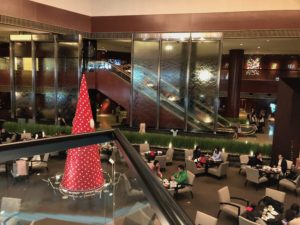 Servers, dressed by Junko Koshino, were as good as any in Paris. Michel Chertouh continued discussing similarities between French and Japanese, their energy and willingness to learn – and then, sadly, it was time to leave The hotel’s mezzanine balcony dining spot was absolutely full, again all young women, magnetically, it seemed, drawn by the gargantuan Strawberry Picnic, sponsored by Perrier-Jouët. It is $40 a head, stay as long as you like and, of course, eat your fill. Needless to say some of these size zero-zero customers had about three pounds of shortcake, trifle and other strawberry delights piled high on their plates. Of course they all had glasses of bubbly, too. On our way out, too, we went through the main lobby, dominated by a ten-foot tall cone made of over-6,000 macaroons. Strawberry-coloured of course. Michel Chertouh smiled and declared he wants this luxury hotel to be a proud reflection of Tokyo and its vivacity. AND NOW SEE MORE OF PIERRE GAGNAIRE’S CANAPES