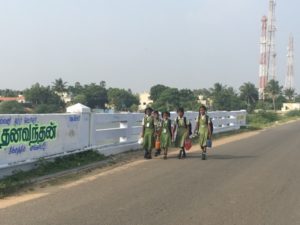 Girls walking to school near the hotel

After Taj Coromandel, Chennai’s premier iconic heritage hotel, the gal headed an hour south to an equally unique luxury resort hotel, Vivanta Fisherman’s Cove, Chennai by Taj. This is in Kancheepuram, a world away, it seems, from city life. Get there, says the gal, and you want to stay, next to a small village where girls walk to school, and people smile and ask if they can help. The 32-acre resort is on the site of a fort built by the Dutch in the 18th century – they were driven out by the Nawab of Arcot, who was then tricked by the French, subsequently defeated by the British. Since the hotel opened in 1974, it has been a retreat for city-dwellers, coming at weekends to escape the city and its notorious traffic. 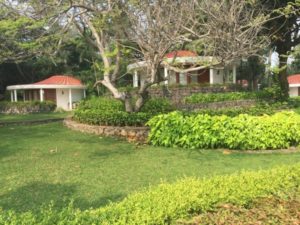 Arrive at this 152-room resort, and you take deep breaths of fresh air. This is nature, with enormous lawns meticulously tended, and hundreds of casuarina trees, and, of course, Covelong Beach, on the Bay of Bengal. At the far end of the resort’s land is a vacant spot where an impromptu cricket game was causing lots of excitement. We walked across to the new, slightly-curved block of hotel rooms, three floors high, where all upper floor rooms, with balconies, have views out to sea, but for best ocean views stay in the one of the resort’s cottages or villas and you have almost hobbit-like exclusivity, right next to the ocean – see the surf, above. 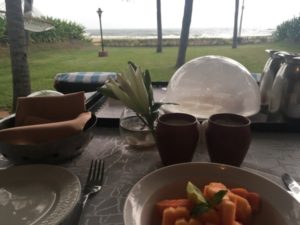 Early breakfast on my ground-floor terrace

I was in Villa 34, a one-room detached house with neat front garden and, behind, a hammock hanging between two of the coconut palms on the 20-yard grass stretch that runs to the beach. I loved waking up and looking out at the crashing surf and, exactly on the dot requested, breakfast arrived. Two servers put a gigantic white damask cloth over my terrace’s table, and set my meal up, even with flowers – the home-made yoghurt was some of the best I have had on this entire trip, and the brown bread rolls almost spoke the word ‘healthy’ (I had actually asked for them last night, when they were served at dinner outside at Upper Deck, the evening-only alternative of the three main eating venues here). 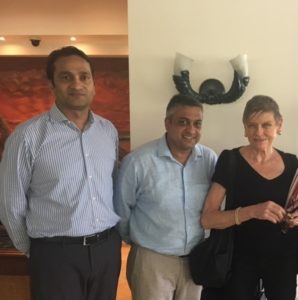 The music at dinner had been spectacular. A local guitarist, in scarlet pyjamas and a black fedora, was jamming with his son, on electric keys. This is an area for music and all culture, says Souvik Bhattacharya, GM of this luxury hotel. Chennai’s 90th annual Madras Music Season this year runs December 15th, 2016 through to January 1st, 2017, and features traditional Carnatic (Southern Indian) music. The oldest choral music group is in Chennai, which also has a vibrant theatre scene, and city’s classical dance, the Bharatanatyam, is the official dance of its state, Tamil Nadu. NOW WATCH THE VIDEO OF MY VILLA