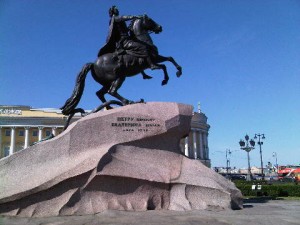 The statue of Peter the Great is waiting for brides, in all their finery, for photograph time

Peter became co-tsar, with a mentally-challenged brother Ivan: their older sister Sophia was regent, and she gave a lot of power to her lover Prince Golitsin.  When he was only 17, Peter upped and kicked Sophia and her prince out of the way – Ivan played a very limited role until he too died, in 1696.

In St Petersburg, couples have their wedding photos taken by the statue of Peter the Great.  Spied there this morning was a bride in full white, awaiting her man. She dragged on a cigarette to pass the time. 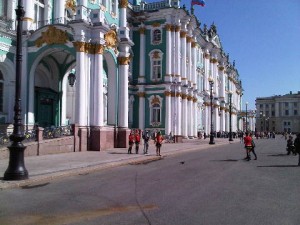 Also ready for photographs, locals in historic dress by the Winter Palace

Everything in St Petersburg looks so good in the early summer sun.  Yes, summer is here, and W St Petersburg has opened its rooftop terrace. The period of White Nights means early-early sunrise and late-late sunset.  Tour buses are out and about by 0630 to beat the crowds.  Within an hour or so locals dressed in period costume are gathering outside the Hermitage, which looks gorgeous, painted as a wedding cake. 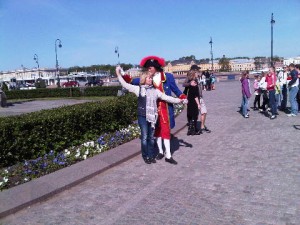 Have your photo taken with history, or so it looks.  You see men in tricorn hats and women in ruffles and full-petticoat skirts by all the monuments around St Petersburg – and one lovely thing about this city is that every street has monuments.

From Hotel Astoria, I ran left, past a statue of Tsar Nicholas I towards Mariinsky Palace, and turned left along Naberezhnaya Reki Moyki, bordering one of the many canals that give St Petersburg the label of Venice of the north.

At the junction with Nevski Prospekt sits the Talon Imperial, a club-hotel.  Turn right along Nevski Prospekt, past the Kazan Cathedral where, all day long, both sexes, all ages, line up to kiss the main icon.

Carry on and there is the gilded Singer sewing machine building on your left and, one block on, Grand Hotel Europe.  Retrace steps, time to go, say goodbye to Sir Rocco Forte, heading on to Munich to watch – the Russian-owned – Chelsea beat Bayern Munich, to win the Champions League on penalties. 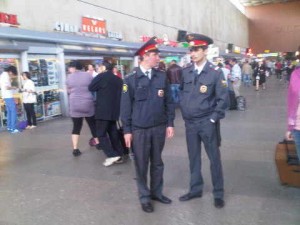 Dress the part, around the world.  There is something incongruous in Russia about the pairing of weedy men with outsized hats. These giant hat-tops do not look so stupid atop older guys with beer bellies that are typical of the, say, post-30 age group.

They look completely ridiculous when worn by skinny youngsters who look as if they would fall over if you said Boo to them. Do the hats have any practical purpose at all?  Perhaps they keep the rain off.

While Sir Rocco flew away from St Petersburg, we took the train from Moskovskiy Station to Moscow.  Tickets? Via Express To Russia. Lesson to everyone.  Never EVER fly between the Venice of the north and the capital of Russia. The train takes around four and a half hours and costs half a plane fare.  Flying you need up to two hours for airport transport each end, plus check-in time plus flight time, ergo longer, more expensive, less fun. 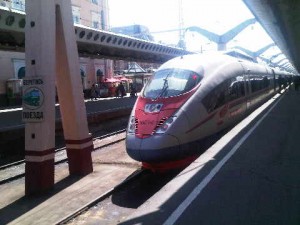 The trains look just like Eurostars and Shinkansens, and they go just as smoothly. Unlike those trains, here there is security screening, for self and baggage, before boarding. Immaculately-groomed young agents stand by the open doors of each long carriage, with electronic readers.

Show your e-ticket to be scanned, show your passport, go to your seat.  You sit two abreast, have plenty of legroom and onboard Wifi, and four channels of music – but no electric socket. 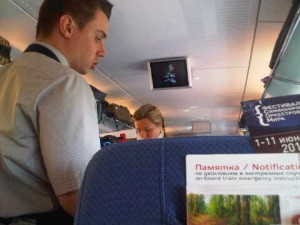 Onboard service from rolling carts

No point in paying for First Class, apparently – twice the price, seats are leather, food is free, that sounds like the only difference.  In steerage, carts come up and down the aisle, airline style, manned by eager-beaver youngsters in, again, immaculate uniforms.

I remember that the boss of Russian railways, Vladimir Yakunin, is associated with the forthcoming Four Seasons Hotel Lion Palace St Petersburg, which bodes well for the uniforms and details of that hotel.

The mind wanders as we rush noiselessly, smoothly through the Russian countryside of forests and little villages.  Uniforms at lovely, agreeable Hotel Astoria were its weakest point (what a pity the front desk ladies look like Sunday School teachers). 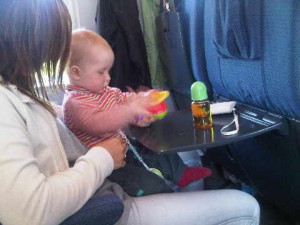 But there is little time for mind-wandering on this train journey. All onboard announcements are given in Russian, and faultless English.  There are about half a dozen young mothers, all slim and beautifully groomed, each with a child aged 18 months to four years.  (Are there men around, one wonder?  This is an area of Russia where there are 54 women to every 46 men, many of whom are ‘unsuitable’).

These mums are travelling independently, but the kids start wandering and getting together. One child has nonstop lessons from its mother, a bit of art, a bit of reading, a bit of adding up, a bit of singing, nothing too long.  They are charming rather than the nightmare that this would be in, say, the UK or USA where kids are Little Kings and have no idea how to behave (Russian children are usually really well-behaved, I am told later). 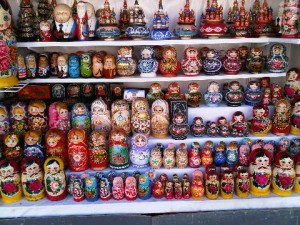 Matryoshka dolls, being turned out by the thousands - but political faces are now 'out of vogue'

Their onboard playthings are international, floppy toys and plastic buckets and spades (is there a beach in Moscow?). They do not play with matryoshka dolls, reserved for tourist souvenirs – though now, whether decreed or not, these dolls do not have the ‘political faces’ found on examples in the days of, say, Yeltsin.

Quietly in a corner of the carriage sits a young nun, whose peace is interrupted by a 40-ish guy who goes to sit with her and talks (he) non-stop (to her) for nearly an hour.  Where else do trains provide onboard confessionals?

We rush  through endless hundreds of miles of forest (what would it be like doing the Siberian Express?  That would be to much.  We stop at Okulorka, Bologoye, Vyshny Volochek, Tver, for one minute each.

Exactly at the hour stated, we pull quietly into Moscow’s Leningradsky Station. Hundreds of people with bags disgorge to the platform, many rushing for public transport and others looking around to find their meeters and greeters.  One sign is held high above the crowd.  InterContinental has come to meet the gal…