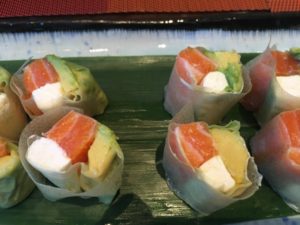 Mandarin Oriental Las Vegas may have a whole lobby wall of what looks like gold bullion bars but is one of that city’s two top luxury hotels that has no casino of its own, and can be reached without going anywhere near one-armed bandits and the like – unless, that is, you cannot avoid the machines taking up nearly every available space at the airport. But this property not only has that advantage but is also linked in to the massive CityCenter complex, which includes Aria and Vdara, and since CityCenter is half owned by Dubai Holding and half owned by MGM, it also links to all MGM’s other hotels in town. This means, says the gal, you can stay in Bellagio, Mandalay Bay, MGM or any other MGM property and cross-sign, and therefore eat, at a myriad of places. 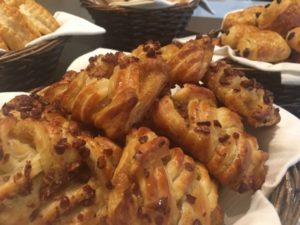 Pastries with an MO twist

Honestly, staying at Mandarin Oriental and eating at Mandarin Oriental suited me just fine. I did not need to try anywhere else, especially since it was 105 degrees outside. Personally I was happy with MOzen, the casual Japanese-international brasserie – try the Bowman sushi at lunch or dinner, and a croissant version from the breakfast buffet. The signature restaurant Twist gets top billing. As every year, hotel GM Donald Bowman outdid himself entertaining his top-performing travel advisors during Virtuoso Travel Week last week: as a surprise for 75 or so of them, whom he had invited to Twist on Tuesday August 15th, 2017, Pierre Gagnaire flew over specially, tearing himself away from his annual August summer break, and he cooked as only Michelin chefs can. Now Mr Bowman has the challenge of beating such an extravaganza next year. 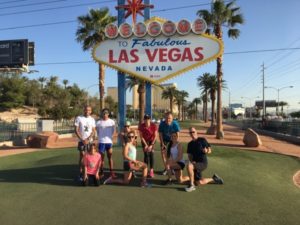 He is always called Mr Bowman, by the way, although he signs his messages to staff merely ‘Donald’. He was in the 300-strong team when the hotel opened December 2009 and when he came back in 2016, 200 of that number were still here, augmented by many newcomers as the total complement is now 600. With overall turnover of 10% it shows a lot is being done right. Sponsored by Lululemon yoga wear, there are weekly runs, Wednesdays at 7 a.m., guests invited too. There are regular MOLAS (short for Mandarin Oriental Las Vegas) Meet Ups, things staff like to do, say playing golf or going bowling, and last year 89 of the entire team either got promotion here, or they transferred to other Mandarin Orientals. 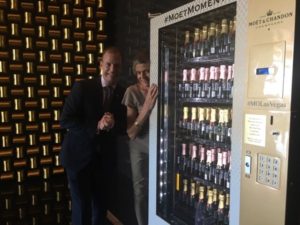 It does seem that this is a luxury hotel that beats several records. Last December the hotel’s marketing communications director suggested buying a vending machine, and her boss agreed. But this was no ordinary vending machine. As the photo shows, it dispenses quarter, 187ml, bottles of Moët, Brut or Rosé Champagne. You buy a $25 token from front desk, 20m away, and you are also given a small golden plastic flute. Put the token into the machine and press your chosen number. Out pops the appropriate bottle, and you can use your flute if you do not want to drink from the bottle. Not only has the hotel regularly been taking $15,000 a month since the machine was put in but it has garnered, wait for it, a full quarter of a BILLION online impressions. Some feat! NOW SEE A VIDEO OF SUITE 2228, BELOW