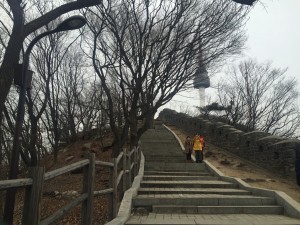 Climbing up to Seoul Tower

Best way to acclimatise on returning to Hong Kong Island is to get up The Peak, by running, jogging, walking or even by funicular. In London, a good workout around Hyde Park, or Green Park, Kensington Gardens or St James’s Park, does the anti-jetlag trick. After a near-11 hour flight from London to Seoul‘s Incheon airport, followed by another hour in the hotel car, the gal thought a trip up Namsan Park to Seoul Tower would do the job. See what this looks like in summer, above – someone has helpfully put up images of the summer-look to tempt today’s winter exercisers. Head out of the luxury Millennium Hilton Seoul hotel, cross a couple of zebra pedestrian crossings and start climbing. A lot of the trek is just rough earth but there are indeed steps, 713 of them in all. The entire round-trip took me 75 minutes. 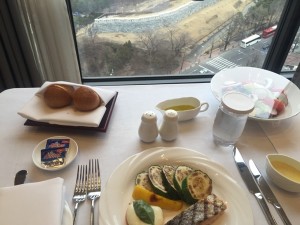 Room service by the window

Back in my new home, namely 2128, a duplex suite in this imposing 673-room hotel, I was hungry. The room service waiter thoughtfully put the table right by the window, so I could look up the hill. There were a couple of weddings planned today, here in this matrimonially-inclined hotel, and I was later taken to The Atrium, an event space that today had been decorated with white ceiling hangs, and white candles on all-white tables. Older female guests were already bustling around over an hour before the planned start, making sure that everything would be just-so – the mother of the bride and her friends were in full length, full-fabric, one-colour chima skirts, with short jeogori jackets over (younger women were in regular Western dress). 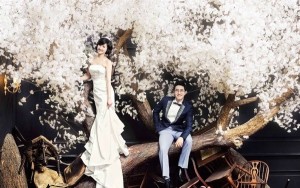 Wedding dates are decided by fortune-tellers, apparently. The day might be a month ahead, or nine months ahead, but you should go with what is suggested. As in many countries, photos are taken ahead of time, and displayed at the actual event. And, as is increasingly common, wedding photos are more and more outrageously theatrical, it seems. I was dining that night, in the hotel’s lovely Genji restaurant, with Eric Swanson, GM of the hotel, and his wife Jeon Soo-Kyung, generally known as ‘SK‘ – she is Korea’s top actress, and she opens in yet another production of Mama Mia! on February 24th, 2016 (she has been playing Tanya since 2004). They were married, here in the hotel, in September 2014 but oh what a drama it turned out to be. 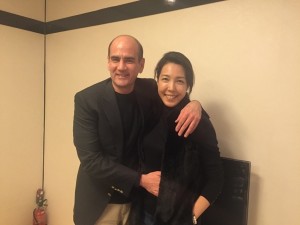 You could not make this up. They were being driven, on their wedding day, to the hotel. She was in a full-length couturier gown, he was in black tie. Their white stretch limo came through one of the bends in the nearby roads and a tyre flew off. To cut a long story short, he was hospitalised, but released with his face covered in bandages, Phantom of the Opera style. She went ahead with the planned pre-nuptials press release so that when the wedding started, an hour later, all 500 guests already knew, via social media, what had happened (they later had a repeat performance, of the party not the earlier disruption, for the 500 employees of this friendly and thoughtful luxury hotel). Fifteen months on, they, and others, can laugh about it but, at the time, it was a case of fact is often more unimaginable than fiction.