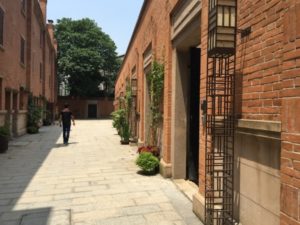 One of the project’s authentic streets

Well, there is always something new coming up, and when new revives the old, the story can be even better. Before we get to how Shanghai’s French Concession affects a forthcoming luxury hotel, let us start, says the gal, with a bit of history. The concession ran 1849 until 1943, when the Vichy French government signed it over to the pro-Japanese puppet government in Nanking. For much of the 20th century, the area covered by the former French Concession remained the premier residential and retail district of Shanghai – it was also one of the centres of Catholicism in China. Despite re-development over the last few decades, the area retains a distinctive character. 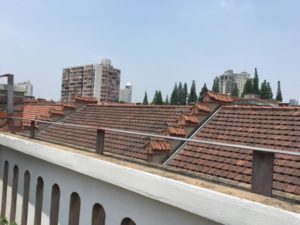 It is a popular tourist destination, and now it will be a magnetic luxury traveller destination, too. The reason is that about five acres of streets of existing three-floor brick houses, crammed next to each other terrace style, are being turned into what will be, as of March 2017, The Capella Shanghai. There will be 55 ‘houses’ – not so much villas or apartments or rooms as three-floor houses – as well as 40 apartments for long-let. Capella is closely involved with the plans of developers Shanghai Henfu Investment & Development Co, and with what designer Jaya Ibrahim is doing. I had a tour of one of the houses. 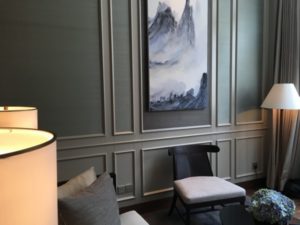 Enter a small courtyard garden, about ten by ten feet. Go in through this mean-business wood doors, about 12 ft high, into the ground floor. From here it is 41 wood steps up past a small sitting room, the main bedroom, the bathroom and, finally, a door leading to your private roof space. I climbed through one basic interior, and then the show house. This is absolutely gorgeous. Jaya Ibrahim has put in smooth wood floors, lots of mirrors, wood piping, and, overall the palest avocado and teal colourings. 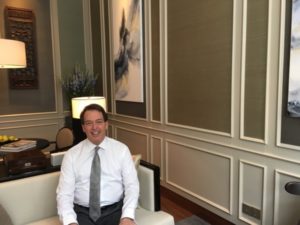 I was being taken round by Nicholas Clayton in his role as advisor to Pontiac Land, the Singapore-based company that oversees the Capella brand in Asia. No wonder he is smiling – but will he still be so happy as the planned opening date, March 2017, looms? There is still a lot to do to make this into his ideal luxury hotel.