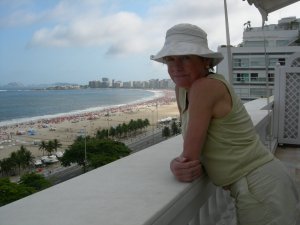 The balcony and the beach

Glory of a morning, looking out over the balcony of room 601 of Copacabana Palace, Rio. Tomorrow is a big day here, five years exactly before the start of Olympics 2016 and I am here to talk to the Olympics President, Carlos Nuzman, and the designer of the lovely logo – as friendly as London’s is disconnected and out of sync. But back to today, another glorious day in a glorious place.

Wake up, see it is just getting light (six o’clock), head downstairs to borrow bike to join hundreds of locals, of all ages, in the morning constitutional. Parallel to Avenue Atlantica, the beach-side dual-carriageway, is a two-lane bike track which goes the entire four kilometres from Morro do Leme along to Forte de Copacabana – that is to say the entire length of Copacabana Beach. You can then cut through to Ipanema Beach for another three kilometres.

The cyclists, runners and walkers are all ages and types, from the healthiest (and perhaps wealthiest, but you would never know) to positive geriatrics who waddle along somehow, oh so bravely. At the Morro do Leme end is a paracourse workout station, with various instruments-of-torture painted bright apple green and sky blue, and here some of the most aged move their muscles and chat. I wish I understood Portuguese as I bet their gossip is sensational. 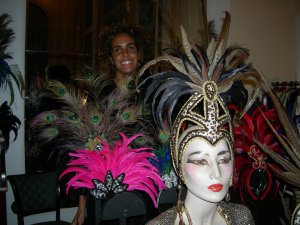 So much to do in Rio. I love it for its movement, its vivacity. At Carnival time the city becomes one big party for several weeks. Buy your mask, headpiece and the rest of the gear, whatever, it is special. But, any day year-round – and right now it is winter – you smile because everyone else does, and, for me, the mango on the breakfast buffet, when I go down in a minute, is going to be the best in the world.