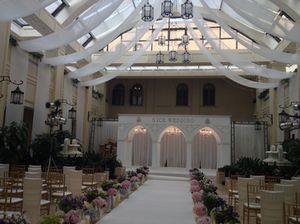 All ready for a Nice Wedding presentation

Here we are in the most famous luxury hotel in China, but you would not know it from the Nice Wedding fair that takes place tonight in its central Victoria Lounge, permanently glassed over but now transformed into a holy of holies. The emcee, the hotel’s lovely media link, a would-be, but would-NOT-be, lawyer, Joycee Li, will wear a red wedding gown, with professional make up, to introduce suppliers promoting their products to a hundred invited men and their intendeds. These men are lucky, says the gal. With 117 men for each 100 women, Chinese males have to work hard to find a fiancée, and they are egged on by their parents as it is the wife of the only son who is expected to look after his ageing parents. 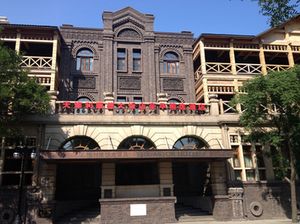 Exterior of The Astor’s heritage wing

OK, so here we are, at The Astor Hotel Tianjin. It is visible from Victoria Park, just across the road. Why Astor? No, nothing to do with John Jacob and his ilk, but rather the three Chinese characters Li Shun De, which apparently mean ownership of understanding, and power of reason. This all started in 1863 when British missionary John Innocent, whose name seems rather suitable for a religious type, bravely bought land from Queen Victoria’s representative John Gibson, and built a house that grew and grew. Very soon he had the British and then all the other European consulates here. He opened rooms to let, created a hotel. 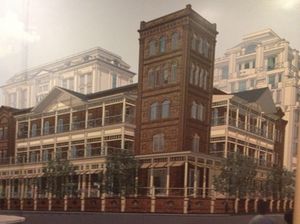 New wings were added, in 1924 and the mid 1980s, and in 2008 the whole was closed for 18 months, to re-open as a glorious 152-room Luxury Collection hotel, its interiors tweaked and, where plausible, modernized by Alexandra Champalimaud (think bars at Claridge’s, London, and The Pierre, in New York). Some like the newest-block rooms, looking immediately across Taier Zhuang Road to Haihe River. I adore 409, in the heritage wing overlooking Victoria Park. I have wood flooring with a big rug, and wood paneling, and deep plum damask curtains. I have a four-post bed with gauze drapes, and excellent connectivity, and a television inset in the over-basin mirror. 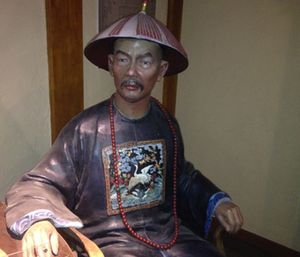 A statue of Li Hongzhang in the hotel museum

The themed suites include 288, where Dr Sun Yat-Sen lived, and 385, where President Herbert Hoover honeymooned. Even if you are not staying here, on no account miss a self-guided trip to the hotel’s brilliant museum, which tells you the history of Tianjin and its Concessions, and of the hotel. The mannequins include Li Hongzhang, he who lived in Beijing’s Xianliang Temple (now site of Waldorf Astoria Beijing), and who, aged 74, made his first visit, with great ceremony, to New York. Why is he here? It was he who signed the Sino-French Tianjin Treaty here at the hotel, in 1885. 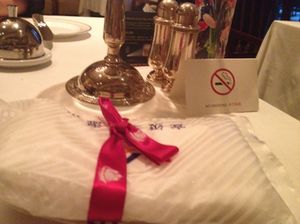 There are historical pointers everywhere. Having seen images and table settings, in the museum, of the hotel’s restaurants in former days, we check out what is available today. Of course there is Chinese, Shui An. There is also 1863 The Dining Room, which has been relocated from its former glass-roofed hall to a side room, with outside terrace looking over Victoria Park. The table setting is nostalgic – hot moist towels come in bags, wrapped in ribbon – and so, deliberately, is the menu. I choose fish and chips, attributed here to a Mossely recipe, from Oldham, UK, 1863 style, which turns out to be light goujons, with outstanding fries as opposed to traditional chunky chips, and a spoonful of pea purée (=their version of mushy peas), and another of tartare sauce. 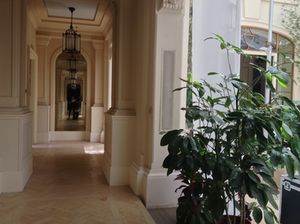 Time to leave this historic beauty

Afterwards we check out the luxury hotel’s justly famous O’Hara’s English Bar, named for one of the first shareholders in the hotel (though it is doubtful that he ever experienced the sushi and sashimi that is served here, next to big displays of Hendrick’s Gin).   I am told about, but decline to try, a Last Cocktail (3/4 oz each of Gordon’s Gin, lemon juice, pear juice, rosemary essence, then the glass topped up with Prosecco and a clove stuck in the top).   After a great night’s sleep, one window open but no bird song heard, I pack up the trusty Porsche Rimowa wheelie and we are once again on our way.