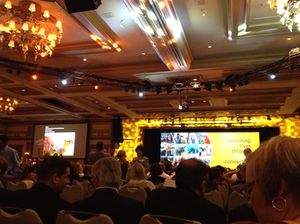 The biggest gathering of the world of purveyors of luxury travel is the annual Virtuoso Travel Week (VTW) the second week of August. For 26 years now it has been held at Bellagio, Las Vegas’ luxury mega-hotel that takes its name from a villa on Lake Como – fortunately Bellagio, the Vegas one, can cope, looking after the 4,420 delegates to VTW as well as a few other guests who are here for the casino, or just to stare at the size of the complex. As always, says the gal, the event started with an opening forum, with keynote speaker Patrick Lencioni, whose latest book, Getting Naked, stresses the power of vulnerability. 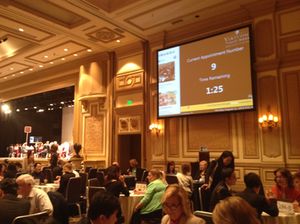 .. but later speed-dating gets underway…

As one of four invited students from Ecole Hotellerie de Lausanne said later, he was amazed not only by the professionalism of VTW but by the transparency, the emphasis on vulnerability and the sharing of Virtuoso data and thoughts that could well have been hidden from outsiders. Yes sir, from the Chairman and CEO Matthew Upchurch through the whole organization, the Virtuoso team wants to share. There was a lot of sharing going on, by the way. 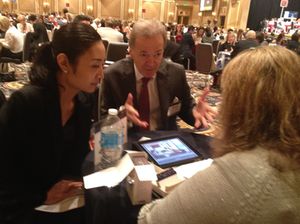 The business essence of VTW is four days of speed-dating. Travel advisors (agents) sit at assigned tables and every four minutes, when the bell rings, yet another hotelier, or other supplier, comes along. The advisors stay put. It is hoteliers, of the calibre of The Peninsula Tokyo’s Malcolm Thompson, seen here, who have to move, and not just around one hall but then moving to another area – there are hosts, with Japanese-style tour-guide boards, to guide them as they become dazed, glazed and bewildered. It is hoteliers who lose their voices, as they repeat, yet again, what they want the advisors to hear, four minutes and no more and then move on. Try to stand out? The boss of The Jefferson, Washington DC, handed each of the advisors a two-dollar bill (not often seen), with the head of Thomas Jefferson on it, so he, and his hotel, would be remembered. 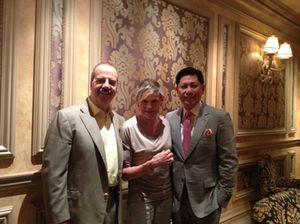 Matthew Upchurch, who guides Virtuoso, has a perfect colleague in Albert Herrera, who heads relationships with luxury hotels. Every hotel worth its proverbial salt wants to be in Virtuoso