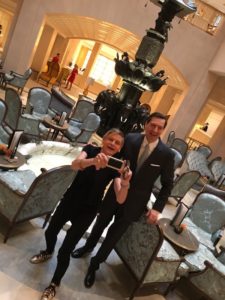 Berlin’s most famous luxury hotel has undergone such a face-lift that it is more a face transplant. When the gal went into Hotel Adlon Kempinski Berlin the other day her mouth opened in amazement. Gone was the dark and Germanic front desk and concierge area that has been there since 1998. In its place is a light and airy theatre – see above. Also, there is a lovely new MD, Matthias Al-Amiry, a would-be professional handball player who, following an accident when he was 18, diverted to hospitality through his love of people and travel (banking, he says, would have been just too boring). This is one still-fit man, despite merely being a cappuccino-and-croissant breakfaster, who is a passionate director of the theatre that is the Adlon. The Jagdfeld family has been synonymous with this 383-room hotel for as long as most can remember. Originally, in 1998, the main designer was Ezra Attia, from London, with bedrooms by AB Living Design, from Stockholm. 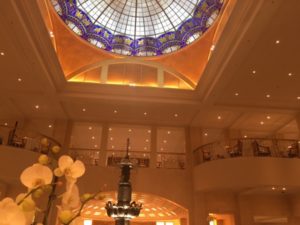 From any angle, the lobby is now golden

Now Jagdfeld Design is creating the transformation – the ballroom is next to receive the magic wand and I was lucky enough to see the renderings of future bedroom looks, which will add soft green, or purple, to the palette (why did designers ever think browns were attractive, especially to women?). Apart from the colour scheme, as always I loved room 518, a walk-through space from foyer to living-bedroom to bathroom, then toilet and foyer, or vice versa. Three pairs of French windows look down at Unter den Linden and left to the Brandenburg Gate: see the video below. As always, too, I am addicted to this hotel’s divine breakfast, though it has moved from the ground floor Quarré, which now only serves lunch and dinner. 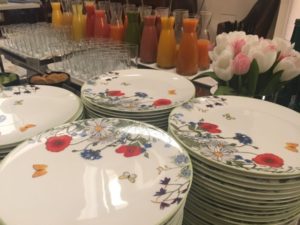 Today, from the lobby, you take 28 aquamarine-carpeted stone steps, or an elevator, up to the mezzanine that goes round around the lobby. Sit at one of the crisply-white tables right next to the parapet and you can see all the activity below. The small meeting room that used to host Kiwi Collection’s annual ITB think-tank is now the permanent breakfast buffet, with attendant chef. Look how the Fleur Cowles-type floral plates, surprisingly from that traditional china company Dibbern, make you smile. I smile at so many unique memories of this luxury hotel. In the morning, shoes returned after cleaning are set outside appropriate doors, in black fabric bags on white-lined black trays. Your newspapers hang outside your door in a shallow fabric bag from which you can easily extract your Financial Times and International New York Times without the least bit of a tussle. 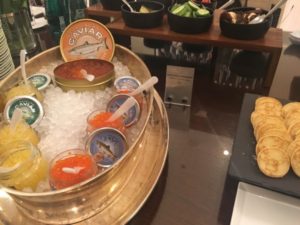 What type of caviar today?

And then, at breakfast, the plates are big enough for the typical-German (not Matthias Al-Amiry!) to choose at least a dozen small samples of cheese, sausage and other goodies – Germans like to put their breads, and rolls, in a separate container. Add the luxury of the caviar and blini selection. Yes, this is luxury, what you did not know you would appreciate, like the caviar, paired with what you really do need when you need it, now. The totally selfish folks at Texel airport, perhaps worried that they might lose their jobs when Berlin’s new airport eventually opens, chose the vital day of ITB to go on strike. I later heard stories of others taking cars, at $1,200, to Hamburg airport. The concierge team at Hotel Adlon Kempinski got me, via a colleague in Bremen, on a flight out of Hannover: they arranged a suitable train (a mere €118) to Hannover, and drove me to Berlin’s hauptbahnhof in a Maybach. While I waited, a considerable baritone from the city’s Staatsoper was singing in the four-floor open concourse, his rich tones relayed to and much appreciated by the thousands of travellers hurrying this way and that, like a Lowry painting. I doubted that the concierge team at Hotel Adlon Kempinski arranged the concert but for them nothing is impossible. NOW SEE THE VIDEO OF MY ROOM, BELOW