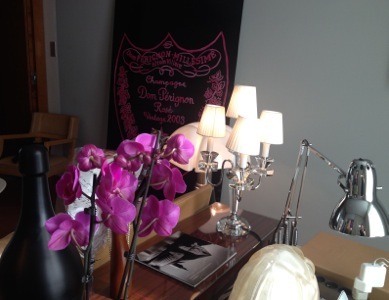 Looking through suite 204, with flowers matching the Todd Selby placard

Le Royal Monceau Raffles Paris is a joy to those living in the vicinity of this luxury hotel. They love it for its restaurants – French, Italian, all-day bar coffees and drinks, cigars by night and eating outside in summer (97 percent of all those spending on food or drink here are from the neighbourhood). They know they can come for Michelin-starred food, or for spa nutrition, very attractive, says the gal, to chic Parisians. How about a Royal Booster smoothie, for instance, with chia seeds, gluten-free and offering 20 percent each Omega-3 and protein, plus calcium and vitamin-C? 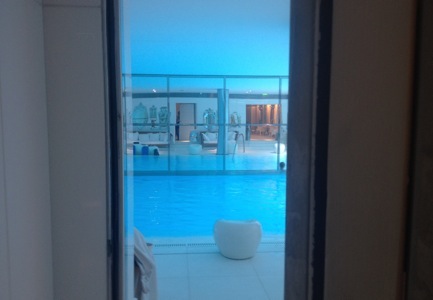 Looking through to the pool

Local  members of the hotel’s club, come for the 149-room hotel’s health facilities – who is that famous politician swimming his daily lengths in the 85-foot pool, with daylight flooding in from its ceiling window? The MyBlend by Clarins spa, the first anywhere, is divine, an all-white cocoon, its corridors lined in full-height billowing curtains, its treatment rooms similarly all white. You are greeted, in a white and mirrored boudoir environment, already feeling better just by being there. 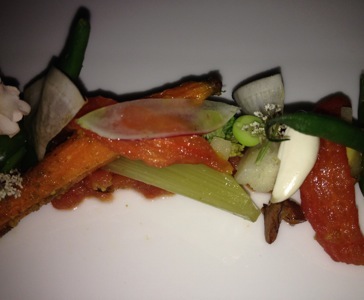 Later, try a detox salad, as devised by Olivier Courtin-Clarins, the director of the MyBlend by Clarins brand. You get curly kale, citrus, shrimps, black truffle, and gluten-free crackers. He also suggests Pascal Hamour flower infusions, say a Romacéa Bio Digestive, with fennel seed, verbena leaf, rosemary leaf and grapefruit. … but I was dining properly, in the gorgeous courtyard garden outside the Michelin-starred La Cuisine. The hotel’s really lovely Executive Chef, Laurent André, was constantly popping out to see how we, and others, were getting on, and he sent out amuse starters of seafood lollipops with tobiko, also known as black roe of flying fish. 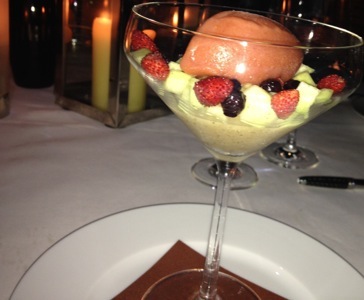 The Dom Pérignon Rose 2003 Paradox launch promotion also includes specific dishes from renowned world chefs, say marinated seabass by Renald Epié, at Al Mahara in Burj al Arab, Dubai (Laurent André’s choice, for Dom Pérignon, is pike quenelle with black truffle and lobster sauce). You can go for a tasting menu here at La Cuisine but, more simply, I had sashimi of salmon with fresh scallion, followed by black cod with honey, ginger, lemon, and a separate bowl of braised black rice. Having started with Dom Pérignon Rose 2003 Paradox – of course – we went on to Clos des Mouches, Beaune Premier cru, Dme Chanson, 2009. The meal finished with Pierre Hermé’s fig, guava, blackcurrant and vanilla and violet coupe… and I heard about the chocolate pop-up bar he is doing here shortly. This really is an action-packed luxury hotel.