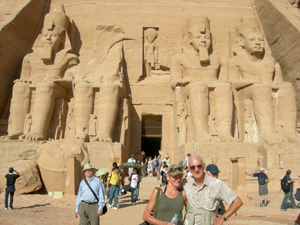 Getting around also includes walking. At Abu Simbel, most fly in from Aswan, take a bus to near the temples, dedicated to Ramesses II, incarnate as Re-Harakhte, and another to his wife, Nefertari. immortalised as Hathor.

Then you walk around and, if you sensible, stay over to see the magic sunset and sunrise.  Sorry, the gal cannot recommend any luxury hotels at Abu Simbel. The best she can do is suggest the five-room, very-basic Ekaleh Nubian Cultural House, with Egyptian warmth of hospitality at the forefront. 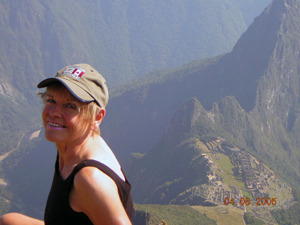 By contrast there is a magnificent hotel right by the gates of Machu Picchu, Peru. Stay down in the valley and you need a 20-minute bus ride up to Machu Picchu.

The lucky few who have reserved at Machu Picchu Sanctuary Lodge – another Orient-Express dream of a luxury hotel – can be in when the gates open at six, and stay until 5.30pm, long after the plebs have left in their buses.  All the lodge’s 32 rooms are the same, by the way, simple and charming.

Best-seller on the dinner menu is the six-hour suckling pig and if you are lucky you will coincide with a holy man who tells fortunes in the garden.  If you are fit, by the way, you will also climb the Wiñay Wayna or Huayna Picchu peak (the photo is at the top of Huayna Picchu – best guide is Hermann, from Cusco.

After trekking in the Andes, being chauffeured in India might seem like a piece of cake.  Forget it.  It is so nerve-wracking some literally throw up.

These over-decorated Christmas-garbed trucks thunder along, taking up every bit and all of the appalling roads. India might be soaring but at least its roads are not boring.  They are a nightmare.

We finally made it to Jaipur, to the calming oasis of Rajviläs, one of Oberoi’s experience spots.  Think Amanresorts with an Indian flair.  The elephants await, as welcome.

I stayed in a tent about the size of a single tennis court, with all the luxuries that a Wimbledon champion would expect.  I stayed in a villa, sharing, with two neighbours, a pingpong table-sized courtyard with trickling fountains.

Wall painting at Udaiviläs in Udaipur

At another of Oberoi’s Rajasthan boutique hotels. Udaiviläs in Udaipur, the ‘elephants’ are on the walls outside the Cullinan Suite.

This is yet another unique hotel, magical for its views, sloping steeply down to the man-made lake that leads the town sometimes to be called Venice of the East.  The Maharana of Udaipur, HH Arvind Singh Mewar, is a transport fanatic.

He has about six solar-powered vehicles (one is an Indian rickshaw with a giant solar panel on its roof). He also showed me his meticulously-tended collection of vintage cars, all attended by valets in full regalia.

The most unusual, frankly, had to be a bastardised Rolls-Royce, its rear replaced by a truck body to accommodate the entire Maharana cricket team.

Time to return to the real world, gal.  It will soon be time for one of the world’s best luxury hotels – at sea. Watch this space.