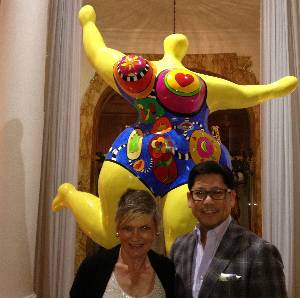 Everyone needs to smile from time to time, and preferably more often than that. Arrive back at Le Negresco, and you are at one of those few luxury hotels around the world that do not need a destination applied.

Raffles? Well, now Singapore has siblings in Dubai, Paris and the Maldives, for heaven’s sake, with more to come.  Savoy? There is one in Florence. And so on. But there is only one Le Negresco, on the Promenade des Anglais in Nice.

The sun is shining outside, and the gal smiles. Come in, past bellmen in 18th century uniforms, and there in the rear of the dome designed by Eiffel, of tower fame, is Karl Heinz Stock’s rotating yellow lady who was turning around just like that, a year ago. 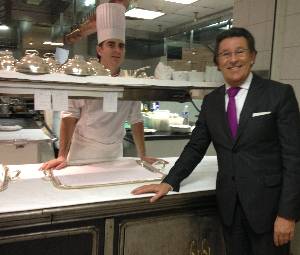 But let us go back 100 years.  The Negresco opened for a couple of months in 1912, closed and re-opened permanently in 1913.  It is therefore celebrating a two-year centenary.

A big even this July brought in A-listers from England and the USA. Many more events are planned for 2013, including – says big boss Pierre Bord – an artisans’ week, starting May 21st, 2013, where cooks and bakers and many more skilled artisans will share their secrets.

Mr Bord took me into the kitchen here, to learn some of the secrets of his chef, Jean-Denis Rieubland.  They posed in front of an original hot cupboard, dating back t0 1912… 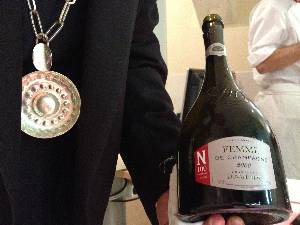 The Negresco's own centennial Champagne, 2000 vintage

Last time I was here at the Negresco we dined in the main restaurant, Chantécler, which now has two Michelin stars.  Instead of sitting in that pink-hued room, with busts and paintings around, this time we were at the coveted table for two in the chef’s kitchen.

The cloth was pink, the floral china, probably original also, was Haviland, from Limoges. The Champagne was the hotel’s centenary special, 2000 Femme de Champagne Duval LeRoy, poured by the sommelier Lionel Compan and probably named for the hotel’s current owner, Madame Jeanne Augier, who lives on top of her hotel. 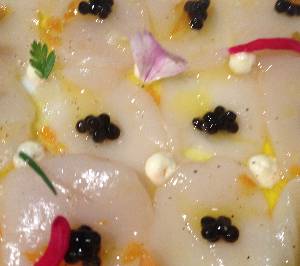 An artwork - of scallop carpaccio

Jean-Denis Rieubland’s father has an enormous vegetable farm and all his fresh produce comes from there (family networks come in handy in the food world, especially in France).  He sent out as ‘amuse’ two tiny vegetable gnocchi, one dark purple (potato) and one green (from what?) with tiny vegetable bites, and flowers, around.

His starter, a carpaccio of scallops with premium French caviar, zest of candied mandarin, fresh herbs, flowers and virgin oil, was absolutely brilliant.

Look at it: the paper-thin rounds of scallops are arranged in military formation, three rows up, four rows across. I went on to his ‘back of cod’, a chunk roasted with Lautrec garlic, baby leeks with truffles, shrimps and shellfish with celeriac. 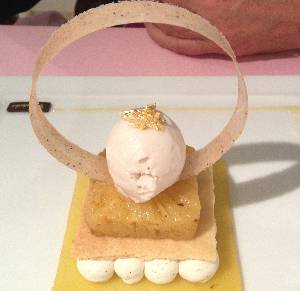 A jewel masterpiece - a dessert, actually

A dessert was sent out.  It looked divine, but then the pastry chef Fabien Cocheteux is obviously another genius. By now we had switched to a local red wine, a Le Clos Vin de Bellet dos Saint-Vincent 2009 Folle Noire.

This folle noire is a grape only grown in this immediate area of the French Riviera; drive the autoroute from Cannes east to Nice and you see the vines on the hillside just to your left.

They only produce five thousand bottles of the wine every year. No wonder it is a rarity – like Zurich’s ‘little steps to heaven’ wine, the locals drink up everything they can get. 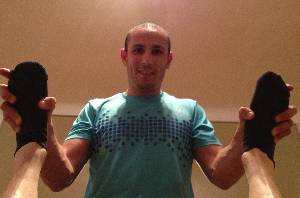 The best body-fixer on the Riviera ....

But the Negresco, of course, is not only food.  It is one of the world’s ten best art hotels, in the form of hundreds of incredibly valuable works by Raymond Moretti (a caricature of Louis Armstrong), Hyacinthe Rigaud (a portrait of Prince Antoine I of Monaco) and numerous pieces by Victor Vasarely.

These are all displayed, in a somewhat kitsch way, on whatever spot is available.  Try climbing up the 155 blue carpeted stone steps from the ground floor to, say, the fourth floor of the six-floor hotel and you have to climb past antique cradles for babies and slightly-bashed copper hip baths for adults.

You can, by the way, get excellent exercise to compensate for all this gourmet dining by running or cycling along the promenade outside or by doing as I did, booking an hour’s workout with one of the toughest trainers I remember, Foued Douma.