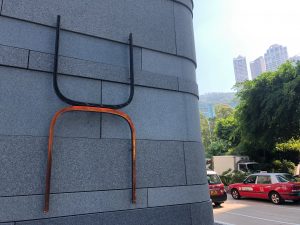 Hong Kong’s Upper House gained an immediate world-luxury following the moment it opened October 2009: this was one of the first marsupial hotels as it is slotted into the JW Marriott, though it has its own entrance, and the only connection is at the seventh floor, used by anyone who cannot access Upper House’s upper lobby by escalator.  This was also the hotel that put André Fu on the global luxury map (it would be tempting to say that the names of Champalimaud, Fu and Pushelberg are ‘everywhere’ these days, but only at luxury level and in select locations). André Fu, born in Hong Kong, has depth, like a three-dimensional light installation stretching to infinity: to this Master of Architecture, from Cambridge, true luxury is experience and not just aesthetics. 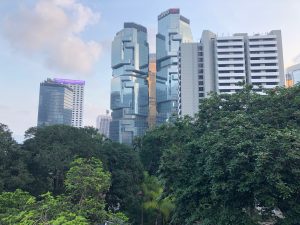 View from my suite

André Fu told me, November 2019, that his current evolution is re-inventing the classic grand hotel – reinvented in the context of the contemporary world. Stay in one of his Upper House suites, havens of pale avocado shades, with such thoughtful touches as window-seat cushions on the ledges of the big wall-wide windows that give some tremendous views down to Victoria Harbour and across to Kowloon, or over to Central highrises and Mid-Level greenery, here on Hong Kong Island.  On the right is the view from 3906, and see what the suite looks like in the video below. From the start, Swire Hotels put in such elements as swing-lever controls for the Emco toilets (so easy to operate, much easier than a simple lever or those ghastly push-in controls that are anathema to nails). 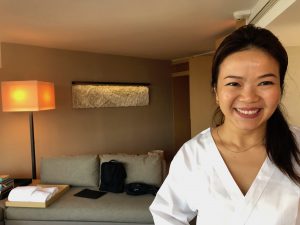 Upper House worked with Myodetox lifestyle therapy from 18-22 November: this is a hotel that wants guests to feel good.  Bamford toiletries have been here for some time in the rooms and now clever hotel GM Marcel Thoma has introduced Bamford treatments right in your suite.  Winnie gave me a marvellous facial, although I slept throughout – the music was delightfully soothing.  All I can say it felt good. By the time I came back up from the gym the portable spa bed and other gear had been taken away.  Mr T was actually away, marketing this gorgeous place in Switzerland or somewhere, but he had left me in the hands of his manager, Kristina Snaith-Lense (I have never worked with anyone with whom I have as much rapport as Marcel, she declared). 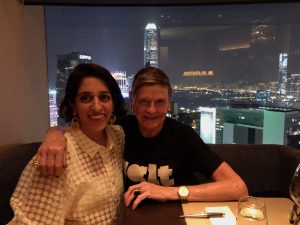 Café Gray – overseen by culinary legend Gray Kunz on the 49th floor of this luxury hotel – is the Hong Kong meeting place of serious global names in entertainment, fashion, and style – these are aesthetes who appreciate that butter knives, at both dinner and breakfast, are Laguiole (and the butter is Bordier, naturally).  I dined off Kunz gravadlax, and a local, chicken breast, with porcini and chanterelles, and a glass of German Pinot Noir, Weingut Meyer-Näkel Spätburgunder 2017 from Ahr. At breakfast, with a hint of Manhattan, the set menus include Upper West, with eggs, and Upper East, with congee. Not surprisingly, the hotel has a repeat-guest factor of around 45%. WANT TO SEE SUITE 3906? SEE BELOW