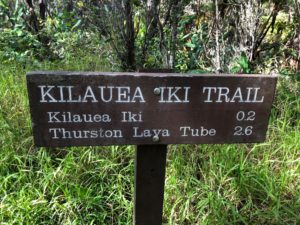 The trails we took

The good ship Navigator, registered in the Bahamas, finally sailed into Hawaiian waters after a full five days at sea (imagine if luxury hotels had to put up with a full-house and no-one able to leave the property for that length of time). First port of call was Hilo, Hawai’i, more generally known as The Big Island – at 4,028 square miles, it is the largest island in the whole of the USA, and its southern tip, South Point, is the most southerly point of any of the 50 states. Navigator docked at the Big Island’s main city Hilo, second-largest Hawaiian city, after Honolulu, and the gal disembarked for a hiking tour in Hawai’i Volcanoes National Park – Regent Seven Seas Cruises, RSSC, parent of Navigator, includes dozens of complimentary land excursions, one of its many marketing appeals. 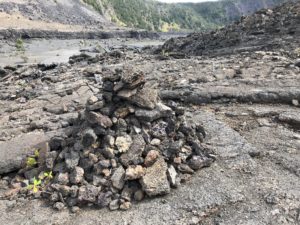 A marker down in the crater

It really was an excellent six-hour trip, starting with a short ride through Hilo and a call at its magnificent Japanese garden, tended by volunteers from Japan. Then the minibus, which was just right for the nine of us hiking, started the 30-mile drive, passing dozens of churches enroute to the Park. The road was not only straight but wide, with wide verges that have continually to be cleared to hold back growth of guavas, not indigenous to the island (we passed very few taxis and the only buses were school buses – transport must be a problem here but Uber is just beginning to come to the rescue). At the Park’s Kilauea Visitor Center we began the serious trek down and across the Kilauea Iki Crater, which last erupted in 1959 – it might have been only 4.5 miles total but it was quite tricky climbing down over uneven basalt boulders. 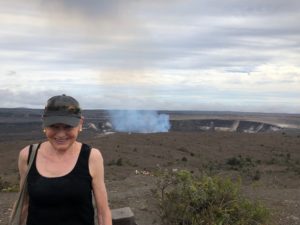 In front of the Halema’uma’u Crater

Our driver-guide was a fascinating young man, Derek from Maine, who, after graduating three years ago in Sociology, came to visit a college friend and stayed. Fascinated by every detail of the Big Island’s flora, fauna and history, he passed all tour guide examinations, and despite having the ship’s Hawaii-specialist onboard lecturer in today’s party he never faltered (interestingly, Derek is shortly leaving to do a Masters in Marriage Counselling in New South Wales – he is taking his dog, Princess Fiona, as Hawaii is exempt from Australia’s ultra-strict quarantine rules). After the main hike, the tour went on to the Thomas A. Jagger Museum, and looking down into the Halema’uma’u Crater, still smoking in places. 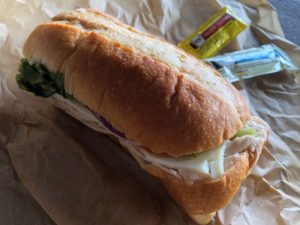 The main Kilauea peak is still erupting, from the Puʻu O’o vent on its East Rift Zone, and some of my new friends on the ship paid to fly over it in a helicopter – oh wow, their video! (can any luxury hotels offer such excitement, I wonder? Yes, helicopter over the Iguazu Falls when staying at the stunning Belmond Las Cataratas). There is one small lodge in the Park, Volcano House, with the same kind of wake-up views as you get at Machu Picchu’s Belmond Sanctuary Lodge, but we did not lunch there. Derek had gone to Subway at 6 a.m.; see my lunch, on the right: this was a two-fer experience, my first-ever Subway sandwich, and my one-and-only Christmas 2017 turkey experience, as having eaten it here, as part of my memorable excursion, I do not need to suffer what I consider a culinary indignity, the ceremonial roast turkey with all the trimmings. FIRST, LOOK DOWN INTO KILAUEA IKI CRATER

AND NOW GO THROUGH THE LAVA TUBE