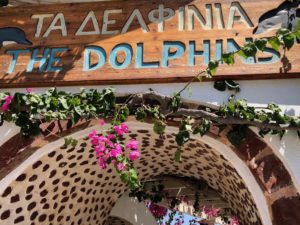 It is really tempting, staying on Santorini, simply to stay on-property instead of going out sightseeing, and this is especially true of such a gorgeously private and luxury resort as Iconic Santorini.  Yes, it is honestly true, the gal was told, that some guests arrive, go slowly down the steps to their room – no-one rushes, in the near-vertical Imerovigli area, and certainly no-one would wish to ‘trip’ their way down – and, once there, stay put, especially since breakfast comes to you rather than vice versa.  But, said Andreas Nauheimer, the German who, from his Santiago base, oversees Iconic Santorini, his hotel GM, Marcela Alfaya, must lead a visit to his favourite restaurant, Dolphins Fish Tavern on Akrotiri Beach (Red Beach). 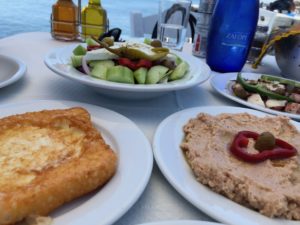 If you did not know it was there you might never take the quiet road south from Remezzo to Akrotiri ruins, next to Red Beach. Surrounded by, well, nothing, is an archway framed in bougainvillea. Head through it, 20 yards, to the sea, with a man-made promontory sticking out. It, like every available surface, has tables and chairs with sunshade umbrellas over.  If you know the right people, as Marcela Alfaya does, you are invited into the kitchen, where Mama Vangelitsa not so much holds court as commands the stove. She personally cooks, calmly and smiling throughout, for about 350 people, every day of the year. 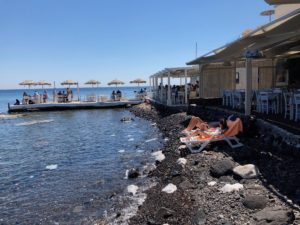 Some guests even sunbathe…

This is family food, beloved not only of locals but also tourists who rave about the views, the cooking and the service – all by Mama’s extended family – and about the value.  This is not expensive food, and it is worth every penny. The speciality is lobster spaghetti but Marcela, who eats like a bird, and I chose a variety of other gorgeous tastes. We shared tarramasalata, and I then went on to grilled octopus, fried calamari and, on the side, a cucumber and tomato salad, which allowed Mama to show off two salad ingredients of which Santorini is really proud. (Other dishes I could have chosen included Mama’s version of the tomato fritters I had watched Iconic Santorini’s chef prepare yesterday.) 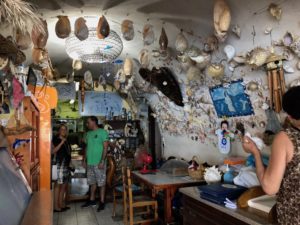 .. others visit the kitchen

The Vangelitsa family also makes its own wines.  What a find: to eat at Dolphins is alone a great reason to return to Santorini. I am reminded of two other culinary families.  First, the Maccionis, who, led by Sirio have taken Le Cirque all over the world – I love Le Cirque in Leela Palace Delhi. I also think of Israel’s Molcho family, namely mime-artist Samy, his wife Haya and their four kids Nuriel, Elior, Nadiv and Ilan.  The Molcho family runs Neni, named for the quartet’s initials, the rooftop restaurant of 25hours Bikini Hotel Berlin, which is packed out every night, and justifiably so (try chef Haya Molcho’ babaghannouj, served with rounds of Arab bread held in a fabric basket, and her Jerusalem platter, namely chicken bits with hommus and capsicum).  Now, I wonder, which luxury hotel will be clever enough to pick up the Dolphins concept? NOW VISIT THE KITCHEN