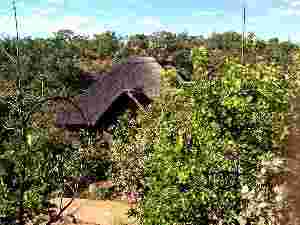 There are many luxury spas in exotic spots in great destinations. Ones that spring to mind immediately are the hilltop-set Sense spa at Rosewood Little Dix Bay, Virgin Gorda BVI, and, in Thailand, the treetop spas at Four Seasons Tented Camp near Chiang Rai and at Soneva Kiri on Koh Kood island.

At the luxury safari lodge that is Shambala Private Game Reserve, the two-room spa has deliberately been built five minutes’ drive from the main resort compound.  The gal needed a deep tissue massage after a stressful last couple of days. Fiona, the spa manager, should win an award for the biggest smile in the land. Welcome – beam. 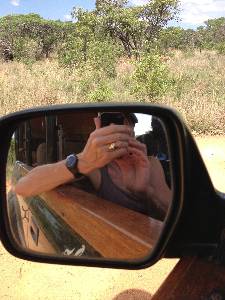 Out into the wild, with my new iPhone as camera

What would you like – beam. I lay down on a bed that was smothered with towels and she smothered me with something or other and pummelled with such professional skill that I am sure she was beaming with satisfaction as one stress knot after another disappeared.

Anxiety at the airport, gone. Would there be a wait at immigration, gone. She was still beaming as she offered iced tea and please come back soon. I had opted for an afternoon tour in the Toyota Land Cruiser, to see what we could see.

Once again I was to be amazed at wild animals’ natural instinct to turn their backsides on any humans. Homo sapiens considers this incredibly rude but for animals it is the norm.  See a lion’s face looking straight at you and by the time you have got your camera ready all you see is the nether region and a tail. I once spent an evening watching a one-time friend’s safari shots and all I saw were hundreds of back ends. 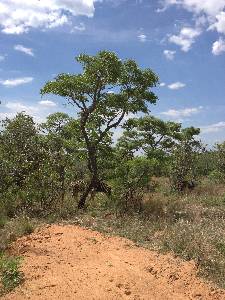 We saw hundreds of zebras...

Now I avoid anyone else’s safari photos, or showing mine, but if I must, maximum six pictures, and quickly. There were dozens of zebras, both Plains Zebra and the more dog-like Cape Mountain Zebra, with narrower stripes.

Thanks to a most interesting small take-it-with-you book in the thoughtful equipment in lovely villa two at the resort, I am able to study more about the animals and what I am told are 250 species of birds here on the 30,000-acre wildlife estate that is suitably called, in Zulu, ‘paradise on earth’.

The more-common Plains Zebra, Equus burchellii, which sounds like a new kind of pasta, is herbivore, weighs up to 340 kilos and lives up to 25 years. Every year there is, like every store from Whole Foods to Walmart, a complete stock-taking and the animal balance is re-calibrated. 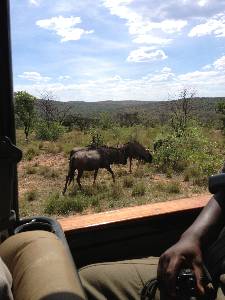 More animals are brought in from other safari areas, swapped for beasts that are in more plentiful supply here, in the paradise that Douw Steyn built and calls his country farm.  The head of the lion pride has an electronic tracker so humans know where he is (every day one of the rangers goes to find the lion).

We do not see them.  We do see hundreds of antelope, baboons, gazelles and more.  Some animals are so graceful – see the gazelles leap ten feet into the air.  Others, say wildebeest, would be ungainly even if put through an entire training programme with the Bolshoi.

We drive down to the lake and see eight hippos frolicking in the water.  I hear they breathe if they are snoozing in the water: instinct forces them to the surface, to breathe in, and then they submerge again, still asleep.  At night they come ashore, to forage. 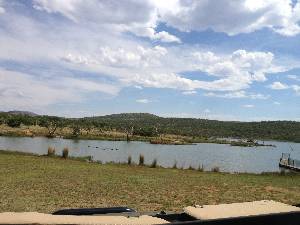 .. and hippos, in the lake that Douw Steyn built...

This is the lake, by the way, where guests of Shambala Private Game Reserve, which is all inclusive, can opt to take cruises, on a two-deck boat that offers great sunset views.  Look up at Douw Steyn’s own house – one of so many (he, international insurance magnate and owner of the meerkat-favourite www.comparethemarket.com comparison site – has just paid £65 million for a house in London’s Belgrave Square. My lesson continues.  As we are stopped literally in our tracks by giraffe, I hear a Zulu anecdote. 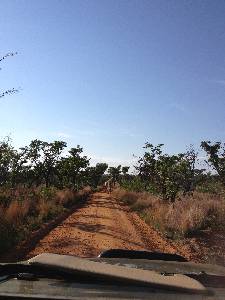 Gossip is crucial, apparently.  The more you gossip, the more likely you are to come back in the next life as a giraffe.  They have amazing eyesight but no vocal chords so, as a giraffe, you would have to live on memories of gossip in your previous life.

They certainly do banter, these Zulus.  On the way back to Johannesburg – where Douw Steyn also owns the super-luxury Saxon hotel, like Shambala Private Game Reserve, a Leading hotel – my driver Ben was stopped by the police, for no apparent reason.

After ten minutes’ chatting and laughing we continued on our way as if nothing had happened. Next time at the Reserve I will return to Fiona, and do a sunset cruise, and take an elephant ride (the resort gives you a hat and camouflage-colour commemorative fleece). 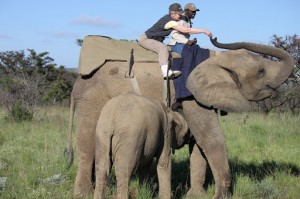 And, next time, an elephant safari is on the agenda

I look at tripadvisor. The latest posting, as of my visit, says ‘this is more than a hotel: it is an experience… food was on a par with some of the best London restaurants… to anyone who wants to blow their other half away, go to this place, you won’t regret it’. Well, Ed75_Traveller from London, whoever you are, I agree, even though I was without My Man.