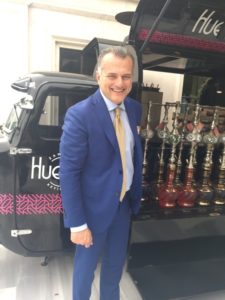 The woman above is pretty smart, or should the gal say pretty AND smart. Her name is Chiara Ferragni, she is Italian, she lives in Los Angeles and she blogs as The Blonde Salad – and believe it or not she has well over three million followers on Instagram. This enormous number is not only in California or Italy but even outside Europe-proper, as Leo(nardo) Baiocchi, GM of the fabulous luxury hotel right on the eastern water’s edge of Europe, Four Seasons Istanbul at the Bosphorus, found recently. He was having a drink with Ms F on the hotel’s terrace and hotel guests and locals having coffee or drinks there came up and asked for selfies, as they did later when Blonde Salad went to the spa. 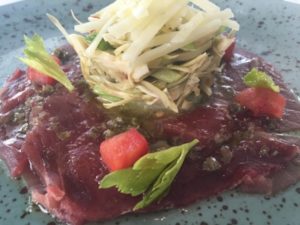 Oh the power of the very top bloggers, who sensibly gravitate to people who are, like her, pretty smart. Leo Biaocchi is always coming up with innovations at his 170-room hotel – this is the place where the coloured embroidery on Yakko bedlinens changes every day, so you know the sheets are fresh. This is the hotel that had no storage for the shisha water-pipes that are increasingly being asked for by Middle Eastern guests, including a lot of women: the creative Italian brought in a Fiat tuk-tuk and turned it into the huqqa centre (he says he learned from a very early age to be inventive as his father was an Alitalia country manager and moved his family on a fairly regular basis from Kenya, where Leo was born, to West Africa, a country here and a country there, and to South Africa). 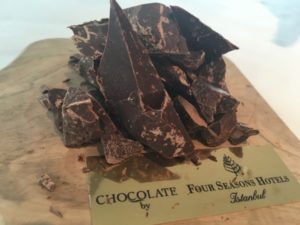 He is a nomad, he says, like many of his hotel guests, and the A-list locals who frequent his public spaces. To make it more convenient for them, his Aqua restaurant, which always moves out to the water-side terrace in summer proper, now has a versatile super-conservatory extension that can be closed off, entirely, if the wind blows. Actually the temperature did a sudden cool-change – almost Melbourne style – just before our lunch so we ate inside-proper, which was sartorially most satisfactory as Leo Biaocchi’s gentian attire beautifully complemented designer Sinan Kafadar’s blue interiors. Thinking of a water connotation, I had the tuna carpaccio to start, and then went on to seabass, and between bites I watched fascinated as a dozen or so Ladies Who Lunch in turn had their photos taken looking through a Mickey Mouse cut-out. 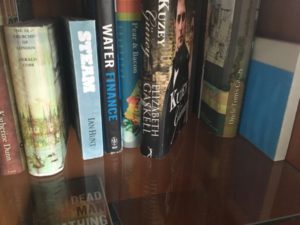 Books, for you to borrow, at Aqua

As a finale, this luxury hotel continued to surprise. Have some chocolate, I was urged. See, above left, how it arrived. Oh the aroma, almost enough to make me want some…. but the surprises had not finished. On my way out I noticed an inset shelf of proper hardback books, so much more stylish than magazines or newspapers, and just another pointer that helps distinguish one place from another. Question to self, should I join Blonde Salad‘s followers and see if she too noticed those books? The answer is no, too much to do, and right now I have a plane to catch – on to the next place. I do not even have time to go boating – see the video below