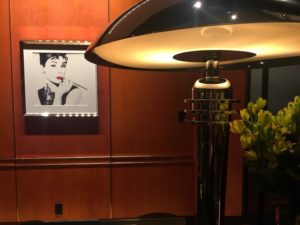 Art behind the conciergerie

The Chatwal is a hidden secret, to many – but those who find it once love it, and go back again and again. This is a New York luxury hotel with unique style, a blend of old and new with Art Deco overtones. See the retro telephone, above, and, sensibly stored right next to it on an upper corridor by the elevator bank, a supply of neatly furled umbrellas. These not only have silver liners to their canopies but their handles are wrapped in leather, matching the leather protectors on door handles in all the 76-room luxury hotel’s bedrooms. Yes, says the gal, this place has the kind of style that you find also at The Beaumont, in London, and there is a bit of Waldorf Astoria Beverly Hills about it, too. 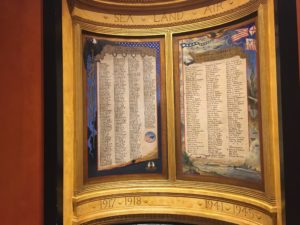 Listings for WW! and WWII

The hotel is named for its owner, Sant Chatwal, who bought what was the ten-floor Lambs Club building on West 44th Street. The Club, in turn, was named for its founder, Charles Lamb, who started it in 1874. Throughout the years many eminent names of the calibre of Fred Astaire, John Barrymore and Douglas Fairbanks Jr were ardent members – many of them are listed on a wall-set memorial of Lambs Club people who served in WWI and WWII. But although the hotel is a tribute to history, it is very up-to-2017, with lots of wow factors. Some seventh floor rooms, for instance, have sizeable terraces, with furniture and fountains. All bedrooms, designed by Thierry Despont, have sensational desks and storage units that look like Malletier trunks, and there are working fires. 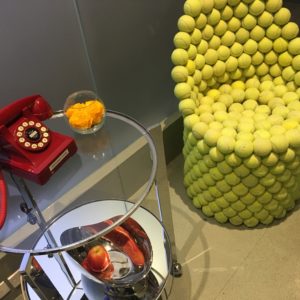 Seen in the gym

I especially liked suite 1009, the Producer’s Suite, which only has a tiny terrace at floor level but climb its 19-step, glass and stainless spiral staircase and you emerge to a huge rooftop terrace, all yours and absolutely perfect for summer entertaining. But of course, it is no longer summer, and I was dining, down in The Lambs Club restaurant – with an enormous open fire and portraits of Club members high up around all the walls – with Ashish Verma, who has run this hotel for the last two years. The food, by the way, is all done by Geoffrey Zakarian, an entrepreneurial culinarian whose company also used to handle The Plaza, here in New York, and has recently added two outlets at Montage Beverly Hills. I went typical New York, with East Coast oysters followed by a Creekstone Farms dry-aged New York strip, though the wine was Californian, from Amador County (interestingly, the wine director here, A.J. Ojejda-Pons, is Venezuelan, and his wines by the glass range up to a Dme Georges Roumier Bonnes-Mares 2008, at $195 for a five-ounce glass). 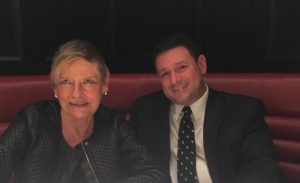 There are so many high points about this luxury hotel. I adore the subterranean wellness, where the small but well thought-out fitness centre – 24/7 and Technogym – looks through to a pool, that space’s far wall a back-lit garden scene so you think it is outside. I am sorry I was not going to be able to stay for lunch, with its best-selling home-produced lamb gyro (the American term for shwarma, Eastern Mediterranean meat cooked on a rotating vertical spit) and, perhaps, a glass of Babylorenstoren rosé, from the Franschhoek complex owned by Koos Bekker, one-third proprietor of Tencent. One other happy memory of my time here was breakfast with one of the hotel industry’s most colourful CEOs, the guitar-playing boss of The Dream Hotel Group, Jay Stein. While he had berries and some kind of parfait I went the whole-English while listening to expansion plans for the Chatwal brand, the Dream Group’s top-tier product, as well as its other hotels. NOW SEE THE PRODUCER’S SUITE