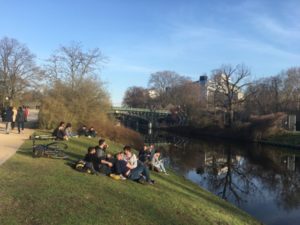 Landwehr Canal (Intercon in the background)

It was a lovely sunny day in Berlin, and when the sun shines in the German capital, everyone smiles. The gal came out of 25hours Bikini Hotel, her lifestyle-luxury home for the past 24 – not 25 – hours, and in the plaza outside, as you can see in the photo above, a crocodile of school kids was taking a constitutional. Or going to the Zoo, which is right next to the hotel. From here, it is only ten minutes’ walk along Budapesterstrasse to Landwehr Canal, built 1845-1850. Look it up online and you see some fascinating items. In 1920 Franziska Schanzkowska, who claimed to be Anastasia, tried to kill herself by leaping into the canal. In 1962 a group of East German refugees commandeered a river steamer to try to escape. An East German patrol boat opened fire but West German police rescued them. 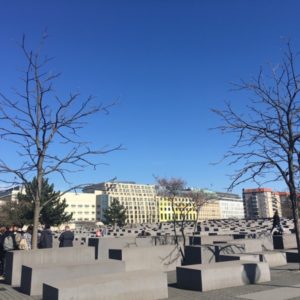 Looking across the Holucaust Museum to the Adlon Kempinski

From here, it was a hearty 45 minute walk through Tiergarten to the Holocaust Memorial, a massive sculpture by Peter Eisenman. When, in 2004, 2,711 concrete slabs were first put into the sloping, 4.7-acre site it was particularly sombre, but now some of the trees have grown, and school kids and others exploring its walkways somehow bring reconciliation into an overall feeling of remembrance.

Beyond I could see the rear, Behrenstrasse, entrance of the Adlon Kempinski, my objective that day. Outside the front of the hotel, Pariser-Platz was full, as always, of tourists, and a group yelling something and waving Pakistani flags. Quarré, the hotel’s ground floor restaurant, had spilled out on to the pavement and hearty servers wore padded jackets. Yes, the sun was shining but it was still March, albeit the last week of the month. We sat inside, at crisp white-covered tables – I was amazed to hear that all the hotel’s laundry is sent to Poland, but then this iconic hotel is continually amazing. 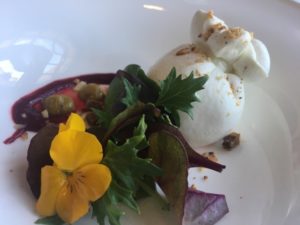 Caprese at the Adlon Kempinski

The cheese in my caprese, shown here, is German, and it is honestly as creamy and tasty as the treccia from Puglia that I have had on two occasions, in Mandarin Oriental Taipei and Mandarin Oriental Tokyo (not coincidentally my host on both occasions, Paul Jones, moved from Taiwan to Japan, taking his supplier’s contacts with him). Matthias Al-Amiry has brought ideas with him, too, from other luxury hotels he has run in the past. He gave a hint of how he will inject even more art and fun into the Adlon. His wife is an artist and going to exhibitions is one of his hobbies, so let us see what happens here, before my next visit. It was time, now, to move on. My Golden Goose shoes were tired and I was tempted to get in an art-decorated pedal-cab, as below, but decided that taking the S-bahn was probably quicker. 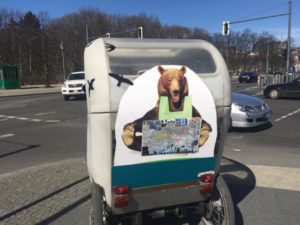 One form of Berlin transport