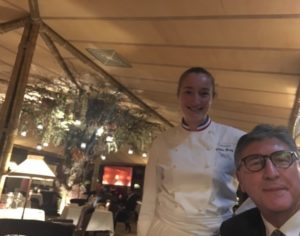 The gal has already raved about the Geneva sunset that started as a pink hue illuminating Mont Blanc, but then the colour got increasingly vivid. It was time for the sun to go to bed, and for mere humans to see what La Réserve Geneva had to offer in the way of dinner. The Chinese restaurant was completely booked – apparently there is a noticeable increase of tourism from Mainland China, parents who would have sent their adored only children to boarding school in Australia or England, now diverting to the Geneva area. Fortunately Didier Le Calvez, still (just) CEO of Michel Reybier Hospitality, which includes the La Réserve hotels, had a reservation to try dishes from Virginie Basselot, one of the most charming female MOFs imaginable. 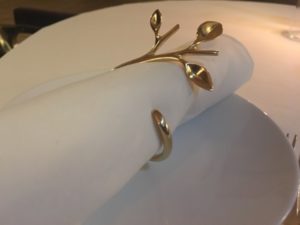 She is also, obviously, seriously talented, and dining in Le Loti is pure delight. The big square space, true to the hotel’s theme, looks like a safari tent, with lots of greenery up the central tent pole. Places are set with finest Garnier-Thiebaut linens, Bernardaud. and golden twig-shaped rings. What did we drink? Well, this is the first time I have been with Didier Le Calvez when we have not drunk his own wine, Château Clarisse, which, with the help of his winemaker Stéphane Derenoncourt, who also looks after Francis Ford Coppola’s vineyards, has been taken to great heights. No, tonight Le Calvez chose two wines owned by La Réserve’s owner, Michel Reybier, first a 2014 and then a 2009 Cos d’Estournel St-Estéphe. 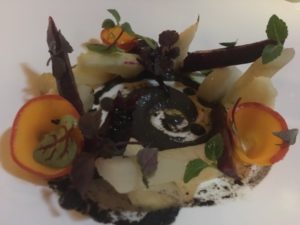 We were also, of course, there for the food. Organic bread chunks came with slates holding cubes of butter and elaborate silver spoons of seasalt. I started with a divine ‘old vegetables’, for which read ‘heirloom’, collage, with a mushroom coulis. We then shared an enormous veal chop, carved tableside and served with artichoke halves. After that I went to be bed, forgetting to order one of the 13 different pillows available (what do you do with a hop, or millet, pillow, eat the stuffing?). I wanted to be up with the lark to finish an article before tomorrow’s events began, and yes, as I ‘walked Marin County’ on a Technogym treadmill looking through a glass wall at the indoor pool, there was a man swimming at 6.15 a.m. 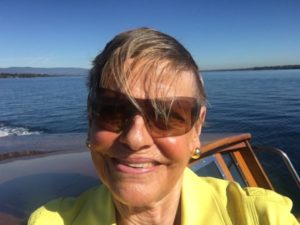 This is certainly a place for the fit and healthy, and I could have had more Virginie Basselot at breakfast. Set meals from 7 a.m., include the usual continental, with hotel-labelled preserves, and full-cooked, or the chef’s special, with Swiss hot chocolate and one egg, sunny side up with local ham and tomatoes. At the appointed time, a charming young Swiss man knocked on my door to escort me away from this truly enjoyable luxury hotel. We walked three minutes to the lake, down and through the under-road tunnel, and up again, to emerge at the private wharf. Grégoire the boatman had waiting the 14-year old Venetian slipper launch which provides complimentary shuttle between the hotel and downtown, and we were off, for what turned out to be a far-too-short 12-minute ride. SEE THE VIDEO BELOW TO GET AN IDEA OF THE HOTEL’S COMPLIMENTARY SHUTTLE TO THE TOWN CENTRE