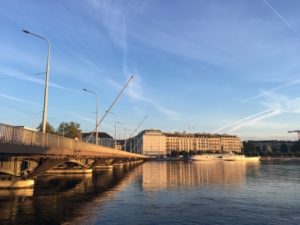 Looking north across Lac Léman, to the hotel

Geneva is in carnival mode right now – it started on National Day, this very Monday, August 1st, 2016, and extends for two weeks. In fact looking at its signature Jet d’Eau, leaping 459 feet up out of the middle of Lac Leman, or Lake Geneva, it gives the city a bit of a carnival feeling year round. Little did the local powers think, says the gal, that when they installed the jet, in 1886 as a safety valve for hydraulic power, that it would become the most fun symbol of a city known for banking, watches, annual fairs for cars and private jets, and, every weekend, a feeling of absolute quiet as most residents head out of town. 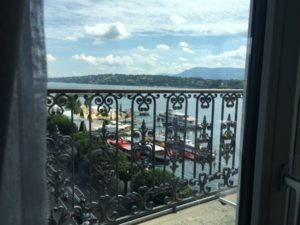 But a new brand is going to change all that. Inspired by the then-new rail line bringing anticipated hordes of visitors west from Montreux and Lucerne, Hotel de la Paix was constructed on quai de Mont Blanc in 1856 (the same year as the neighbouring Hôtel Beau-Rivage). It was an imposing building then, and it still is. Twins Alexander and Michael Manz rent the 75-room hotel from their mother, and as well as bringing in Ritz-Carlton to manage, they are currently spending vast refurbishment sums, to bring many elements up to date. You will still be able to look down the six-floor stairwell in one area, but bedrooms are now gorgeous. 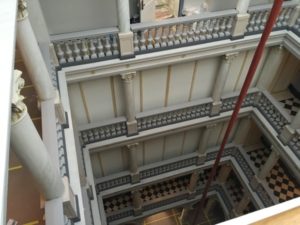 Look down, one stairwell..

A Milanese company, Crea, has shown that Italian interiors simply have flair. 504, a corner room facing south, and east, over the lake, typically has soft blue-grey walls and matching wave patterned carpeting that echo the waters outside. They have even made the blue-grey desk into a work of art: vertical lines are straight, but the horizontal top seems to flow. I love the way they have turned a boring valet stand into a sculpted shape (I saw this, too, at Grand Hyatt Rio de Janeiro; if only it would become an industry norm). They have not, fortunately, attempted to alter the wee table and two chairs that just fit on to the balcony. 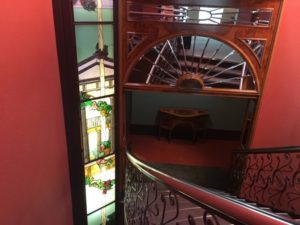 They will not alter another stairwell in this characterful luxury hotel, but they are adapting public rooms, to form a cigar lounge, a bar, a seafood restaurant, and a breakfast-through-to evening eating venue that will not only concentrate on local products but will really accommodate those with dietary restrictions.

Since Guillaume Benezech, the Bordeaux-born GM brought in by Ritz-Carlton, spent four years heading Paul Bocuse’s restaurants, I think the omens for this hotel are GOOD.

Now see the video, below, of someone who really wanted to get close up to the Jet d’Eau