After a peaceful terrace breakfast – read all about that, here – it is time for the gal to go gadabout.  She is renowned for never taking organised tours – she grew wise, some years ago, to the fact that ‘official’ tours move at the pace of the slowest, which says a lot, and invariably stop at a tacky souvenir shop, which says some more.

It is much more fun to gad-by-oneself.  Look what is going on all around. Turn left out of  the luxury Taj Mahal Palace, Mumbai, and, three minutes’ walk along Shivaji Maharaj Marg, an ambitious mother has set up an extremely rickety tightrope for an infant, no more than six years old, to cross.

Around this scene purveyors continue with their morning sessions, some concentrating on anything other than fruit or whatever.  All this goes on in the public street, with yellow-topped black taxis rattling through and the occasional big, brightly-painted truck and some old Indian-style bicycles, with big wheels, black frames and sit-up-straight handlebars.

A fruit seller, on the pavement, is actually far more interested in reading today's news

First on this walk was to find a ATM to get some cash. Ha ha, no easy task.  Turn left, head up to the roundabout and see the movie theatre on your right. Ten minutes later, having followed said instructions, there is indeed a cinema and in its foyer there is indeed an ATM but, as one might fear anywhere but especially here, it is indeed NOT working.

Instructions also said as backup go across the roundabout and turn left to find a Citibank.  At risk of becoming a flattened Bombay Banger, the ATM-seeker crosses the road, asks five people in turn, including a policeman.

No-one knows about an ATM (‘but I change money, very good price..’). But to cinema, to try that indeed-not-working again.  Go past cinema and find, wow, immediately next building is a big Citibank sign. Go in. Three ATMs.

Dutch guy just finishing at one, obviously working.  No idea what the rate is, he said.  Good luck.  Amazingly, my debit card works.  The notes are new, the receipt and card pop out and I realise I only changed £10… 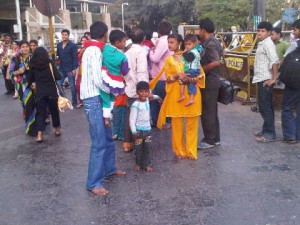 Bombay families parade in their Sunday-best

Back towards the Gateway to India the world and his wife and kids have put on their weekend best to patrol, look at sights, go out in pleasure boats.  The ultimate luxury hotel, Taj Mahal, is as much a tourist attraction as the Gateway.  It lives, part and parcel, with the mass of humanity perambulating outside.

Yes, there are barriers, as there are all around India these days (and as there should be around all top hotels, sorry, but 2012 means that security should be so taken for granted that one can relax within).

There are even police around.  In London you can walk all day without seeing any police – and in today’s news I see they are talking about outsourcing policing (let us hope to the Israelis, or the Americans, or even the French).

The London policeman does not look serious.  I also read today that a shopkeeper in Athens, not surprisingly currently devoid of customers, spends several hours a day looking out of his shop at police opposite, lounging against their cars or motorbikes, smoking and drinking coffee. 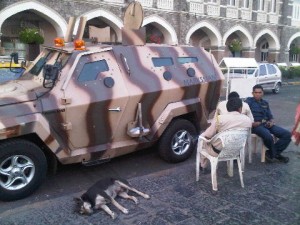 The Mumbai police are now impressively well trained.  They even have their dogs with them.  But it is all a bit hot for continuous alertness…

They know who you are, anyway. With some passports, getting an Indian visa remains a mental nightmare (did the gal put down Ms or Mrs at the beginning of the form, and why does one need a five by five CENTIMETRE ‘passport photo’?).

Each hotel on check-in asks for not only passport but visa number.  Anyway, after all this morning’s exertions, which included a couple of climbs of the Palace’s stairs up to the sixth floor Tata Suite 651, it was time for lunch…