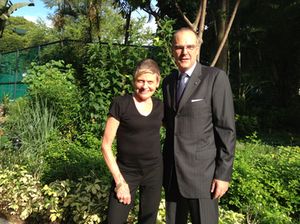 Manfred Weber in front of his herb garden

Manfred Weber showed off his garden, which is the largest in Singapore, some 15 acres in all.  This is Shangri-La Singapore, which includes tennis courts, putting, the herb garden behind him in the photo, and three luxury hotels that together have 750 rooms.  There are those, says the gal, who prefer the somewhat Hobbit-like Valley Wing, where every room comes with a bougainvillea-filled balcony (it is ideal for family holidays, and for romantic breaks). 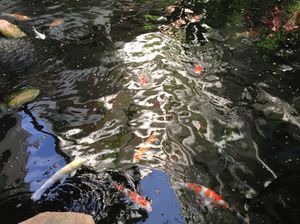 Koi in a pond

Others like the business-like Tower Wing, and the more-exclusive Valley Wing, beloved of Heads of State, CEOs and other A-Listers. The wings operate as separate hotels but share facilities.  Dine in the massive – well, 410-seat – Line restaurant, with dozens of fun buffet stations, or Chinese in Shang Palace, or Mediterranean in the super-duper garden-terrace Waterfall Café, or Japanese in Nadaman.  Wander outside, and try to count the koi. 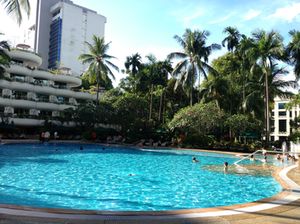 Swimmers in the pool

The pool is large enough, fortunately, to accommodate an enormous number. There are serious lappers as dawn breaks and then it becomes a haven for families. The gym is also big enough, and professional enough, to cope – though why, I wonder, are many gyms just not used enough?  Bet their folks back home think Mr Obama, M. Hollande and Frau Merkel are working out whereas in fact they are relaxing other ways when in Singapore.  The UK’s D. Cameron, after his gauche attempted takeover of the glory of Andy Murray’s Wimbledon win, now has to play tennis on every court he spies as he travels the world being important. 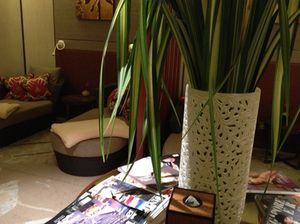 I did the gym thing, and the pool thing, but eschewed the tennis thing in favour of the new Chi spa.  OMG, Ada from Shanghai seemed to unwind every knot in my big body during an hour-long Chinese massage.  You choose the oil, and I will do the rest.  This entailed kneading every part of the human torso, especially the shoulders and thighs, as if they were lumps of dough. If I were bread, I would be Poilâne at the end of it all (talking of which, one of the best snacks in town is the bone marrow-topped Poilâne bruschetta at Brasserie Gavroche, try it). 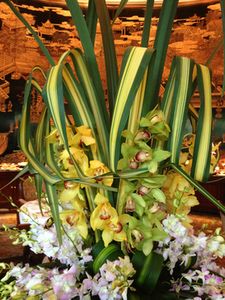 There are flowers everywhere in this urban resort – well, not exactly flowers but leaves in the spa, but certainly flowers and leaves in the kids-free Summit breakfast room for the 136 rooms in the Valley Wing.

This is very elegant. You breakfast surrounded by antique lacquer chests (one is just visible through the greenery in the photo on the left). Your choice from the starter buffet is then followed by a hot dish from the kitchen brought by a white-gloved butler. The room is so high that you cannot, sadly, hear any of the conversations of Members of Foreign Governments at the next table. 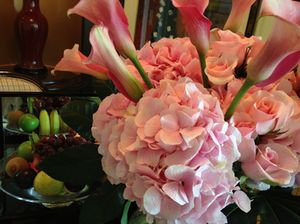 A former bouquet, now a display in room 1553

But the best flowers of all were in my room, 1553.  The lovely Rachel Lee, big-boss Manfred Weber’s manager of this particular Valley Wing luxury hotel, thought I was a Hollywood/Bollywood star on arrival and gave me a big bunch of pink flowers.  Please can someone put them in a vase? What generally happens elsewhere is that such a bouquet is simply plonked, as requested, in a vase.  Here they reappeared as floral art, more Jeff Leatham – he who did Chelsea Clinton’s wedding bouquet – than Constance Spry.  Talking of which, I can buy Vera Wang wedding dresses in one of the hotel’s boutiques, Link… get the dress, get the flowers, be married in the lush gardens, what a perfect wedding venue.