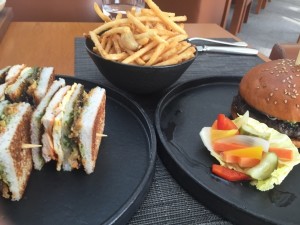 Psy and Gangnam Style – as in the logo above – has been identified with Seoul since the song was released July 15th, 2012 on the album Psy 6, and within six months Gangnam Style became the first YouTube video to reach a billion views. At the luxury Park Hyatt Seoul hotel, they have a Gangnam menu, and of course the gal had to have a look. Shown here are a Klub sandwich, made of rice bread, chili chicken strips, egg and beef brisket – and a Dduk Galbi burger, namely a kimchi-flavoured bun, with Hanwoo beef, and avocado and pickles, and a separate dish of string fries. The hotel‘s Cornerstone restaurant is currently being redone, by designers Super Potato, so we ate up in the 24th floor lobby lounge. 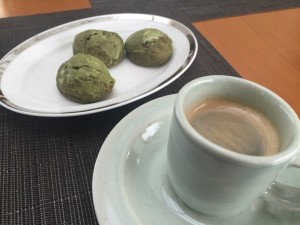 The Korean flavour continued. Espresso came in local celadon pottery, with green-tea flavoured cookies. There were a couple of tables of obvious mothers-and-daughters near us. The hotel has a clever package for them. Stay overnight, with breakfast and afternoon tea included, and you get a pair of framed photos of you both as souvenirs. Now, as Girlahead’s savvy followers will quickly appreciate, this offer could appeal to someone with her nonagenarian mum, or to a Millennial with her toddler daughter, which means some perks, say a bottle of Bollinger or a back massage for two, are not exactly appropriate. To overcome this, and avoid giving offence, the package does come with a hand or foot massage, your choice, for both of you. 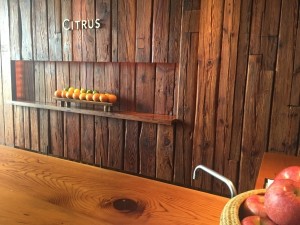 There are other clever things here, at this 185-room hotel. The swimming pool is almost part of the lobby – as at The Chedi Andermatt it is separated from the lobby lounge merely by a glass wall. Walk through the spa area and you come to the fitness bar, Citrus. As with all spa bars other than, perhaps, that at Les Thermes in Monte-Carlo, this facility is seldom used so it is sold, instead, for pop-up product launches. Want to get Fever-Tree tonic or Monkey47 gin (purchased this very week by Pernod Ricard) known to savvy Koreans? Hold a party here at Park Hyatt Seoul, in its Citrus bar. There are clever things in the room, too. A wood ‘wall’ separating the bedroom from the massive bathroom area in fact holds a big closet, which can be opened up, via folding doors, from either space. 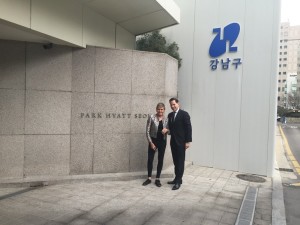 Thomas Harlander, GM of this luxury hotel, honed his skills at sister hotels in Cologne, Washington DC, Los Angeles (the Park Hyatt that is now InterContinental Hotel Los Angeles Century City), Buenos Aires and Tokyo. Next time in town, I hope I coincide with one of his highly-popular wine dinners, when all participants thoughtfully get a business card holder with cards for all the wines tasted, to avoid having to make notes, perhaps increasingly illegibly, at the time.