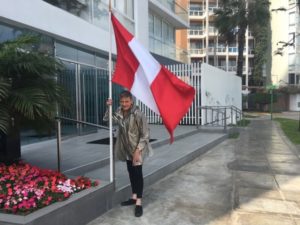 Every house flew a national flag

The gal found the arrival flight a little taxing, to say the least. LATAM’s schedule from Miami could be a mental killer, taking off at 0200 and arriving 0640. It happened to be Peru’s Independence Day, and although there was no slackening of business at Lima airport – which apparently is being extended, to help with the peak-time rush of arrivals – the traffic in the city was noticeably less than usual. Many of the houses flew red and white flags, as did the capital’s leading business hotel, Swissôtel Lima. A nice touch was having red and white roses decorating room 1610, which turned out to be one of the most desirable in the entire 345-room hotel as it is double normal size, and it is always a great help, when it comes to saving time in what is essentially a CEOs’ base, along from the club lounge. 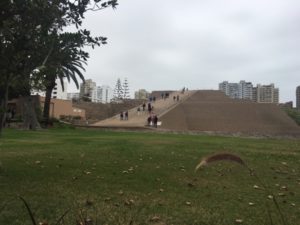 I had been so grateful for the hotel’s greeting service, and having my room ready, and a supply of bananas waiting. When I had surfaced, so to speak, I took a walk about this San Isidro area of town, with Olivar Park a couple of blocks in one direction, and Lima Golf Club in the other. Out of my window I can see Huaca Hualiamarca, an 80-foot tall ziggurat of beaten earth on top of adobe bricks, the whole originally painted yellow: investigation has revealed three different ages of burial here, dating back to pre-Inca cultures, from 200 BC up to the eighth century. Then it was time to begin serious eating. Frank Spielvogel, GM of this agreeable hotel, came from F&B and it shows (I even have a card in my room suggesting Gourmet Flight Box, food to-go for a flight, with four options including a Gourmet, with fruit, roast beef sandwich, chocolate croissant, truffles and a drink, remarkably good value for $12 total). 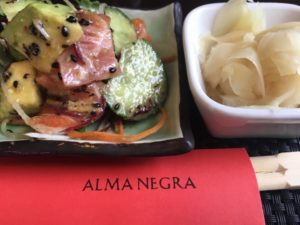 I decided to lunch in Sushi Cage, run by chef Itamae Norio Takeda, and of course I have to have Ensalada Norio, with organic lettuce, Japanese cucumber, avocado, carrot julienne, turnip sprouts, slices of salmon, tuna, flounder, marinated with Japanese spices and crispy fish. Very generously, I am actually brought a complimentary amuse with a mini version of the same, and this and the subsequent main salad are outstanding. Japanese for lunch required being followed by a Peruvian cocktail and then, in a Swissôtel, a Swiss dinner. I met up with Carlos Sologuren, a would-be professional artist who now, after years with American Express, heads a team of 25 selling the hotel to markets new, and old. 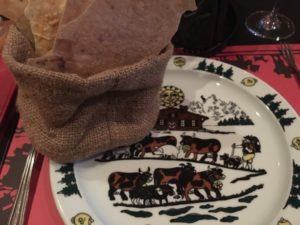 First came Pisco sours, in hotel-labelled terracotta vessels holding the eggwhite-topped brandy and lime drink that tastes innocuous, with potentially serious results (do not worry, I only managed half of one). We then joined a couple of dozen locals in a seemingly authentic alpine hut, Fondue, that was in fact brought lock, stock and barrel from Switzerland, and our server wore a charming dirndl. We had the beef fondue, cook-it-yourself, with seven dipping sauces, and then I went back upstairs to my home, to one of the most satisfying beds for a long time (Tripadvisor comments do mention great sleeps). And in the morning, after a good post-5.30a.m. workout, I checked out both the Café and the Club lounge breakfasts. The latter won, hands down, for its strawberries and for the yoghurt jars up there, La Abuela by Smart Foods Peru – this is the first time I can remember raving about a commercial yoghurt in a club lounge. Try it here at this luxury hotel and see if you agree. SEE THE CLUB LOUNGE, BELOW