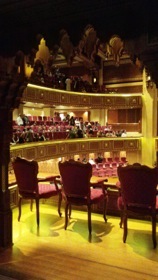 An evening to remember

It was just past ten o’clock in the evening when the Sybaritic Single finally reached Muscat, where he travelled to attend an opening night at the Oman capital’s magnificent Royal Opera House. Upon checking-in at the city’s emblematic luxury hotel, he inquired where he could have light dinner. To his surprise and inconvenience, all restaurants, bars and lounges closed early and one small bowl of pistachios was all he could find.

As morning came, the Sybaritic Single was surprised to notice a legendary Italian designer resting by the swimming pool perfecting his perfect tan. They exchanged subtle nods but never spoke. The cracked tooth could be good for whistling at sailing boats, but not for making a first impression.

The rest of the afternoon was quiet and sparkling, and the evening at the opera was enjoyed in utter silence. By the time the Sybaritic Single returned to the hotel, all of the restaurants were once again annoyingly closed. Arriving back in polished limousines, opera tuxedos and evening gowns had no choice other than ascend to their rooms long before midnight.

By the third day, the Sybaritic Single felt a bit hungry already. As he woke up, he discovered that his linen trousers were missing – he had left them by the pool the day before. Therefore his only options for breakfast were either wearing a chic Dior opera tailcoat or his favourite baroque Versace silk shirt in operatic Technicolor. The Sybaritic Single preferred the latter.

The moment he walked into the breakfast room, the Italian couturier and his dozen-strong entourage turned their heads in absolute awe – the unmissable look of the Sybaritic Single could not be more contrasting the designer’s subtle aesthetics.

A few minutes later, the couturier got up and approached the fashion protester’s table to say a friendly buongiorno. The Sybaritic Single greeted him back with a faint smile and promised himself to stay away from pesky pistachios at luxury hotels ever since. The Nutcracker suite played in his ears.