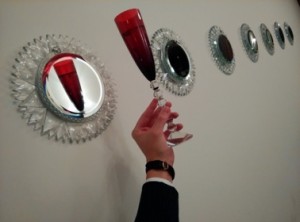 Apart from Dior, Fauchon and Champagne, the Sybaritic Single is passionate about luxury hotel retail. In-between his jet-set, he sleeps in a bed sourced from the world’s most luxurious hotel with pillows kissed by the signature amber perfume from a palace hotel on Avenue Montaigne. The favourite cocktail set is carefully shipped from Singapore’s most famous hotel bar, and all table linen is from a New York landmark on Central Park.

The entire Casa Sybaritic Single is fashioned to resemble a hotel chamber, a harmonious chaos with many objects acquired at luxury hotels around the world – all of them chosen for their impeccable aesthetics and quality.

The walls are adorned with seven round Baccarat mirrors arranged so that they look like windows of an airliner’s first class cabin, while retired Louis Vuitton baggage doubles as storage, keeping memories of countless departures and arrivals. After all, the perpetual romance of travel is what a modern nomad appreciates.

However, the latest acquisition, sourced from a fashionable resort in the remote Australia, proved to be less than inspiring. The 15 kilograms of lacquered wooden hangers were excessively bulky and while they looked fabulous, their doubtful practicality challenged even the Sybaritic Single’s generous limits of absurd. The bed linen looked immaculate from afar but a closer inspection of its baroque embroidery revealed quite a few imperfections.

Nevertheless, the last nail in the coffin was once the Sybaritic Single lit an oil burner and added a few drops of the hotel’s signature fragrance. The olfactory cacophony of patchouli, ylang ylang, bergamot, cedarwood and rosewood was screaming loud enough to wake up the Sybaritic Single from his relaxed daydream in horror.

Resolutely, the remainder of the oils flew straight into the bin and the Sybaritic Single concluded that his long-planned holiday at the luxury hotel on the Gold Coast might have to be reconsidered.