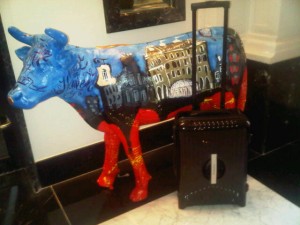 Cow, painted with a likeness of the hotel, and trusted wheelie, lobby of InterContinental Amstel Amsterdam

Just another (sorry, YET another) memorable day in the Netherlands.  Edmund (Rimowa, my trusted wheelie) managed well on his first international foray.  He is quickly realising the kind of hyper-activity he has to lead. It was wake-up and breakfast in the serene, 1867 vintage InterContinental Amstel Amsterdam, by architect Cornelius Outshoorn.

The gal opened the wood shutters in the luxury hotel’s top floor corner suite 402, and would have looked out across the Amstel river except that the entire city, the entire nation, was still completely blanketed in fog.  Look out at white.

The Amstel’s gorgeous marbled and chandeliered lobby acts as gallery for a lifesize cow, descendent of the painted cows first spied in Zurich about a decade ago and since copied in so many major cities.   This one shows the Amstel.

We sped first to Leiden, a medical and university city,  We drove past the Corpus museum of the human body, and on to The Hague.

Just before reaching that beautiful city we passed the new Louwman Museum, with over 230 antique cars in a collection started by Dodge and Chrysler importer P.W. Louwman back in 1934.

The stunning museum is designed by Michael Graves, he who did the Dolphin and the Swan hotels in Orlando, and he who cut an internal light source into Three On The Bund in Shanghai.  The museum’s gardens are designed by Lodewijk Baljon.

This Lincoln carries, in marsupial form, its own motorbike

One of the most amusing is a 1939 Lincoln Sedan Delivery Deco Liner designed by Terry Cool with a front-wheel drive chassis by Gary Brown intentionally to allow a ramp to be fitted so that a motorbike can be held inside it. Just as with Demi Moore, the Sedan partners with a much younger hunk, a 1992 Harley Davidson Sportster Deco Scoot by Denny Jamison. 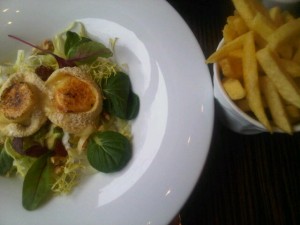 Don’t be vague. The Hague is great. The Queen and Shell live here. The year-old Hilton The Hague is on the site of the city’s telephone exchange and it is all light and bright. A glass-roofed two floor inner courtyard has grass outlines on the upper-level glass barriers, to reflect down to the ground…

The chef, Edwin van den Heijkant, came to talk in Pearl, named for Vermeer’s Lady With A Pearl Earring.  He, chef not painter, is into sustainable seafood, only serve what is local and in season.

He produced a salad with his famous fries – use old potatoes, do twice-fry with a 50-50 split of olive and peanut oil.  These are then served in a white china mug that looked crumpled, as if it were paper. 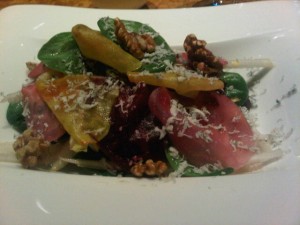 We looked at the Lutine Bar, called after the eight-gun French ship sunk off Amsterdam October 8th, 1799. It is said to have been holding a million dollars’ worth of gold, still not found…

And then, still through a white mist with by now still barely-passable visibility, we dropped something off back at the airport and I was dropped at yet another luxury hotel in Amsterdam, de L’Europe, owned by Heineken.

Dinner was to start with yet another salad, but this time no fries..