Tarek Mourad is a ball of fire, says the gal.  He has to be.  As opening GM of Four Seasons Hotel Baku he is responsible for what will be one of the signature features of the capital of Azerbaijan.

He has to live up to the expectations of the luxury hotel’s owners, and he has to compete with the characterful GMs of other hotels in town.  Ten minutes’ walk along the sea-set Boulevard, for instance, he has two competitor hotels that are already open and busy, with high-profile GMs.

At Park Inn by Radisson Baku, nearest him, is Austrian Stefan Kuehr and, a few steps further on at Hilton Baku is Venezuelan Manuel Avila.

The Beaux Arts-look building is in fact brand new

Tarek Mourad was born in Cairo, and into hotels.  His mother was in PR at the lovely old Nile Hilton, now mothballed as it awaits a phoenix-like re-emergence as Ritz-Carlton Cairo.  Two uncles were GMs in town.

At 14, Tarek, who really wanted to be a professional footballer, started earning pocket money manning lifts at the Cairo Sheraton, and somehow he never looked back.  He moved to Baku from Istanbul.  He now has the task of opening his hotel sometime this July.

And what a beautiful building it is, set just back from the south end of the Boulevard, where the Yacht Club pier protrudes into the Caspian Sea.  Immediately in front flutters the giant flag of Azerbaijan, with its horizontal bands of green, at the base (‘Islam’), red (‘progress’, with a white crescent moon and star on it) and, at the top, blue (‘Turkic heritage’).

The nine-floor building, designed by the London firm of Reardon Smith, is built in Azeri stone, in the Beaux-Arts style of the old city.  Its copper mansard roof has already mellowed to a soft green.  Four Seasons addicts can imagine a blend of Budapest with a hint of both Istanbuls.

The hotel's outer porch has delicate tracery on the ceiling, from which hang high-high lanterns

Four Seasons Hotel Baku is owned by the mighty Pasha Group, chaired by Jalal Pashayev.  Its holdings include, well, everything from banking to travel, with cars (think Bentley), hotels (think Marriott), construction and retail (think Armani through to Zegna, via Bulgari, Tiffany and Vertu and more) in between.

Merhiban Pashayeva, whose grandfather was writer Mir Jalal Pashayev and whose uncle Hafiz Pasheyev was first Azeri Ambassador to the USA, is First Lady, wife of President Ilham Aliyev. Merhiban Aliyeva, as she is now,  is one brilliant lady, a graduate of Moscow Medical Academy who worked at the State Research of Eye Diseases in Moscow.

It is she who masterminded bringing Eurovision 2012 here, to Baku, from May 22-26, 2012.  It is she who, I am sure, is masterminding going for the Olympics, in 2020 or, if not, 2024.  Her daughter Leyla Agalarova, editor of Baku luxury magazine, is doing what she can, say by promoting Baku, the magazine, in UK via Condé Nast and Freud Communications, led by Elizabeth Murdoch’s husband Matthew Freud.

But it is the First Lady who has been taking such a personal interest in every aspect of Four Seasons Hotel Baku. She had the help of Fiona Thompson, lead designer of interior design firm Richmond International – her portfolio includes, in London where she is based, the glorious Promenade leading off the lobby of The Dorchester and, off Piccadilly, Murano restaurant. 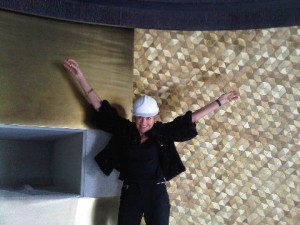 Some of Kaspia's walls, and ceilings, are 'mosaics' of burnished metal shapes

The hotel has a cobbled welcome driveway leading off Neftchilar, the busy street running parallel with the Boulevard.  Go up four stone steps and look overhead, to a delicate ceiling tracery, with 11 high-set chandeliers that apparently, says Mourad, need 36-foot ‘cherry-pickers’ to change light bulbs.  Go on in to the main lobby.

Wow. You are in a giant marble-floored dance hall – except that this is not the ballroom but the lobby.  Ahead is a two-way working gas-fuelled fire, with guest room elevators sensibly out of view, behind.  To your right is a graceful curved staircase, 39 steps up to the meetings and (real) Segah Grand ballroom, 18,760 sq feet of it,  on the first (upper) floor – this, by the way, has 22 gold-topped Corinthian columns, each 16 feet high and each with a flat wall-fixed half-column behind.  This will be THE place in town, and the region, for high-society weddings and gatherings.

To cope with its sloping mansard walls, some Kaspia rooms also have internal, freestanding 'walls' of burnished copper slats

Back to the lobby. Go far to the left and you come to Zafferano restaurant, which spills out, in summer, to the hotel’s stone terrace and Niyazi Street-facing garden (turn right from here and you are immediately in the Baku’s famous Old City). Zafferano, as you will imagine, has an open pizza oven and an Italian chef, Marco Bax, who trained under Sergio Mei at Four Seasons Hotel Milano and is well known in London from his time at Four Seasons London Canary Wharf.

This will all be lovely, but the main ‘wows’ will probably be reserved for the top floor Kaspia restaurant, which will be open for dinner only.  Remember the building has a mansard roof.  Inside, the resulting sloping walls are in some instances decorated with a separate inner ‘wall’ of vertical burnished-copper slats.

Elsewhere, entire walls and ceilings are covered with a curved mosaic of different coloured burnished-metal shapes.  In another room of this fascinating restaurant, the floor is leather, in another a wood ceiling has a raised insert of back-light green dayglo light.

This is Four Seasons Future, methinks.  The ninth floor, by the way, also hosts the Jaleh Spa, which will offer Comfort Zone from Italy, Sodashi from Australia, Swiss Perfection (guess where from) and Voya, with Irish seaweed. The 65-foot pool, down on the seventh floor, has a two-floor glass-topped open atrium above.

The gym is somehow shared between the third and fifth floors….   And oh yes, there are bedrooms, 171 of them in all, smallest size 530 sq ft – there are two signature suites, Hazar and Liman, both 2,890 sq ft.

This will not, by the way, be open in time for Eurovision 2012 – Tarek Mourad is accepting reservations from July. But expect this creative genius to come up with parties and events during the May 22-26 slot (some of you-all will remember the brilliant party that Four Seasons Shanghai Pudong hosted during ILTM June 2011, when guests went through cloth-lined corridors to see show rooms manned by actors in blue boiler suits and silver masks as they pretended to be fixing shower doors and painting floors…).

Yes, Four Seasons knows how to give Disney a hard time when it comes to creative Imagineering.  The last thing magician Mourad said as the girl sped away was ‘Hotels are like circuses.  When the lights come on and janitors start cleaning the stardust off the stage, guests depart in a dreamlike state with ear-to-ear smiles’.