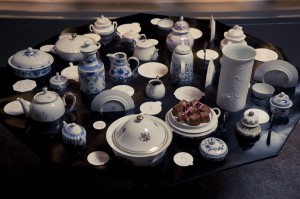 During Eurovision 2012, May 22-26, the still-unopened Four Seasons Hotel Baku will in fact be open for special events, which could fit into the increasingly-used term of ‘pop-ups’, short-term restaurants.  As already mentioned, the Baku specials will be masterminded by the luxury hotel’s creative GM, the one and only Tarek Mouchard.

On a quick overnight in London, the gal reads about pop-up container hotels, plonked down for such special occasions as Goodwood and then taken away. Containerisation of, or for, hotel rooms in fact is not new.

The Vlad Inn in Vladivostok was designed and made in Edmonton AL, shipped to Russia and the containers screwed together.  Each container holds an ensuite room. But the Vlad Inn is not pop-up but stay-put.   Let us return to short-term pop-up happenings.

Andaz has been more than a bit of a phenomenon in the luxury hotel world since it opened in late 2007.  On the site that had been a Bethlehem Hospital from the mid 13th through to the mid 17th centuries, was built a massive 19th century structure by Sir Charles Barry’s son and grandson.

They even put in two Masonic temples.  In 2000 Sir Terence Conran, in a partnership, opened it as the Great Eastern Hotel.  In 2006 Global Hyatt Corporation bought the building, complete with 267 bedrooms, serious bars and restaurants and the two Masonic Temples.

After a couple of months as a Hyatt Regency, it switched to launching Hyatt’s lifestyle brand.  In those days it was ANdAZ, impossible to write and type and that soon became the easily-remembered Andaz.

It had many lucky features from the start, one being the decision to install as GM another creative guy, this time Frenchman Arnaud de Saint-Exupéry (great nephew of the Little Prince creator).

Having travelled and worked around the world before he got into hotels, and having married a professional artist, Aude de Saint-Exupéry, he straddles business and the arts.

Freestanding sculpture in the main lobby

Last time I was there, the lobby of Andaz Liverpool Street hosted a pop-up bed, complete with linens.  This was in fact Once Upon a Dream, by Paris ‘artist’ Mathieu Lehanneur, and literary names, fuelled by Veuve Clicquot Champagne, recited their works to adoring crowds.

Even when there is nothing momentary to see, the lobby is a dream.  You can walk quickly from door to fuchsia-lit elevators, flanked by my favourite flowers, white orchids. To the right as you walk is a kind of dining room, the table holding in this case not china but laptops that interact with the iPads used by roving staff members.

One had already offered me pre-check in, ahead of my visit, but since I still had to go to a real person to pick up a key I decided that was more time-effective.  Leading off the ‘dining area’ is a pantry, with coffee maker, banks of complimentary drinks, help-yourself wine and snacks, from a different restaurant every night – 1901, Catch, Miyabi or St George’s Pub.  No wonder lots of top business people like staying here, again and again.

..and view down stairwell, from the top (fifth) floor

The design helps, of course.  Designer Stuart Wilsdon has made sure there are relevant sculptures, like a wire person outside the 24-hour LifeFitness gym (one of the old Masonic Temples, complete with pillars!).  Look down the stairwell from the fifth-floor elevators and, well, it looks like an artwork.  The upper floor elevator lobbies, by the way, have walls of wire mesh.

Room 574, conveniently near the elevators, has a black and white tiled bathroom in the manner my grandmother might have favoured, but she would not have had a separate shower as well as a really deep soaking tub. Love the heated electric towel rail, and the Plantation toiletries, and a Nespresso machine, and three jars of snacks, including wrapped nuts with a note ‘Andaz inspiring nibbles’.

This is a generous hotel: all non-alcoholic goodies in the minibar are free (spirits are only £8, beer £5), as is WiFi. Your choice of newspaper, including The Financial Times, is delivered before 0530, in a chic card bag.  Inspiration oozes in this place, wow, no wonder they are always up to something here at Andaz Liverpool Street.

When July comes the hotel is preceding the London Olympics 2012 with its own World Food Marathon.  For 26 days a different dish will be served in one of the restaurants that showcases food from one of the 40 nationalities represented by the hotel’s 400 employees.

Eat all this and you will need some exercise.  Down to the gym, girl, or head for a bit of shopping.  Westfield Stratford City, one of the largest malls in Europe, is only three stops away by underground (subway).  Even more exciting is One New Change, ten minutes’ walk from here, by St Paul’s Cathedral.  The owners, Land Securities, held a design competition, won by Jean Nouvel.

Now what he has done for the black, grey and white Sofitel in Vienna is a travesty, but what he has come up with here looks quite suitable, and, shopaholics, head here for Calvin Klein, H&M, Hobbs, Hugo Boss, Kurt Geiger, L.K. Bennett, Links of London, Reiss (a favourite of Kate Middleton, Duchess of Cambridge), Superdry, Swarovski, Swatch, The North Face and Topshop. You can also find other ideas for shopping, and general sightseeing, on worldguide.eu  The girl, meanwhile, is heading for British Airways’ ‘flight’ BA2012, the ultimate in luxury pop-ups…. read about it, tomorrow.