Any hotel that is right next to a main Apple Store starts off with a big advantage straight away (think, in New York, of The Plaza, admittedly the other side of Fifth Avenue). And when a hotel is also right across the road from Opéra Garnier too, wow!

W Paris-Opéra, an ageless vital luxury hotel obviously called for its location, would have impressed the gal anyway.  Paris anyway is worth every second and this particular 91-room lodging pad, officially opened March 29th, 2012, is lots of fun.

Thank goodness for a young Spaniard, Javier Faus, head of Meridia Capital, who saw the merit of buying this 1870s building and turning it into a hotel, and not any old hotel. 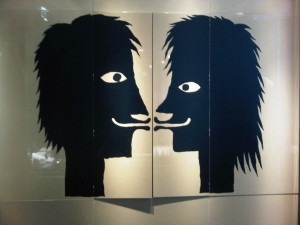 Faus and friends employed David Rockwell’s design group to revolutionise the interiors (the existing spiral staircase is now bright red, on the orange side, and upper corridors are black).

As the owners had done at W London Leicester Square, here Faus and friends also brought in a Dutchwoman, Vivian van Schagen of byviv.com, to source art, which includes a memorable French Kiss in the bar, a closed-V shape that wraps around the cheese wedge-shaped building.

There are witty cartoons, on the walls of Sweat, the gym, and some corridors – one has lots of little drawings laid out as if emulating Paris’ streets radiating out from the Arc de Triomphe, as designed by Georges-Eugène Haussmann for Napoleon III. 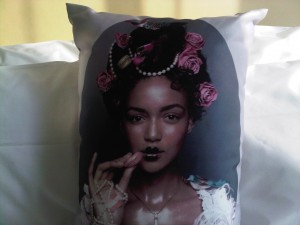 Room 116, like its counterparts, has a sexy pillow atop the clouds of pillows

David Rockwell is ever-versatile – he did the all-white restaurant at Mandarin Oriental Paris. Now, the first-ever W was a conversion of a Doral hotel on Upper East Side in New York.  Also designed by Rockwell, it was sheer simplicity. A mirror was just that, a big bit of framed glass, floor-standing and propped against a wall.  The desk was a ten-foot long table close up to another wall.

There was nothing that was not necessary, as long as you count the growing wheatgrass, and its watering-can, as necessary. But here in Paris, Rockwell’s Europe-based colleague, Diego Gronda, has come up with something different.

Room 116, a ‘Marvellous Room’ overlooking the east flank of the Opéra Garnier, had so much that was extra that it became part of its charm, oh so French! The small coffee table was completely taken up by the make-your-own-Martini kit. The Munchie Box, W terminology for minibar, had spread to take over the top of the unit too…

There were whimsical cartoon paintings on the inside of the closet, and on the wall of the sitting end of the room (partly divided into two, but not completely so really a room rather than a suite).  The bed’s copious pillows were complemented by a small cushion showing a Decadent Dame. 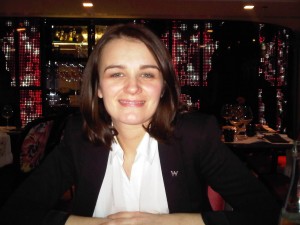 The most Gorgeous Girl in the entire show, however, is Cécile Rummler, the W Insider.  Think concierge and guest relations and mental counsellor all in one, that is she.  Her job is to make all Starwood’s top-tier loyalists feel even more loyal.

She contacts these people about a week before they arrive, to find out and suggest special interests.  When she is in the hotel, she has no uniform – she was wearing miniature frayed-edge denim shorts under a blazer last night.  She can drink or even dine with you, as long as it is in the hotel.

Sergi Arola - who suggests, dishes, cooks'em and then serves'em - is equally gorgeous

And dining in the hotel is an ABSOLUTE pleasure.  Remember the bar wraps around the sharp angle of the cheese-shaped hotel, ground floor.

One floor up, the same space becomes Arola, run by the hyperkinetically-gorgeous Sergi Arola. who seems to come out to talk to everyone about their choices, and he may well serve some of the dishes himself.

Since he is also running restaurants in both Barcelona and Madrid, and he has Mumbai and Verbier coming up, how does he manage to be in so many places, or is it more a Father Christmas scenario, there are masses of’em?

Like bedroom 116, Arola table settings are elaborate. At dinner, a black-printed white runner has patches of tomato red: white linen napkins are hand-embroidered with red or black flowers, and the Laguiole knives have black handles.. Drinking glasses are red.

As canapés you get halves of tomato, plus garlic halves, salt and bits of already-toasted bread: after making-martinis in the bedroom, here you make-bruschettas in the restaurant.  Next comes tastings of a tomato-garlic and almond dip, a shot glass of parsnip soup topped with truffle crème, and the meal begins. Tapas-style, choose what you want.

A long white dish held delicate mouthfuls of eggplant, another had baby artichoke fried as in Andalusia and served on bibb lettuce. Marinated sardine fillets were rolled and served in a metal-look china ‘sardine tin’.  The knife-cut tower of beef tartare was bound with an egg yolk, and served with Poilâne crustless toasts. This is, to my mind, real luxury dining for today’s global traveller.

At breakfast, Arola tables' cloth runners are removed, and a fixed upper shelf is added, with cereal jars and, just visible to the right, a copy of today's Le Figaro and International Herald Tribune

How to follow that today?  It would be great to have time to head to Galerie Lafayette, only five minutes’ walk away to the north, or rue Faubourg, ten minutes to the south, but Eurostar awaits.  Anyway, a run round the Opéra and to Madeleine and back helped start the programme, and then it was back down to Arola for breakfast.

There is even a fixed over-table structure to hold cereal jars and folded copies of Le Figaro and the International Herald Tribune. The jams and butters are French (Andrésy and Beurre d’Echiré).  Oh, I forgot to say, the bed was truly Heavenly.  Barry Sternlicht, when you first thought up W, thank you for putting emphasis on the benefits of a good night’s sleep.