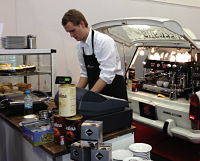 A car makes a restaurant at ITB…

What is a car doing in the middle of an exhibition hall, surrounded by stands of such luxury hotel groups as Kempinski and the newcomer Paramount (proudly showing off future mega-hotel projects in Dubai and Sanya)? Well, even renowned hoteliers and hangers-on need sustenance, and the clever organizers of ITB, the world’s biggest annual travel fair, have used imagination.  In years past there were only bratwurst stalls, stand in line for half an hour to buy a foot-long sausage roughly shoved between a half-slit white bread roll.  Now there are fresh juice stands, with boxes of oranges at the ready.  And this – real – car entranced the gal, as she wondered how they manage to get the coffee machine and microwave and more into it. 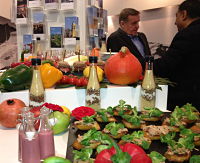 Meinhard Huck at his Swissôtel stand

Actually any stand that was offering sustenance was greatly appreciated.  You can always trust the Swiss.  The Swissôtel stand, personally overseen by the company’s president, Meinhard Huck, had a really good spread, with cherry smoothies and roast-beef rolls (what the Europeans call ‘dressed rolls’). Once again the Swissness of Switzerland came to the fore.  Meinhard Huck was showing innovations in his hotels.  He is putting doormen into Appenzell Sunday-best uniforms, or a designer’s version thereof, with flat low-crown, big-brim hats and expensive silver shoe, and neck, buckles. And each hotel will have a circular silhouette as a cut-out-logo. 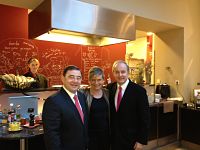 But there were other Swiss around, and the Mövenpick Hotel in town was a popular gathering place for discerning breakfast eaters.  Golly, that sure is a great spread, and a fabulous way to start the day (no wonder the hotel’s boss, Frank Hörl, is so proud of it, showing off his local honeycombs and jellies and much more).  Well, he was entertaining his great supremo, the company president and CEO, Jean-Gabriel Pérès, one morning, and there were lots of other bigwigs too.  This is a fascinating building, by the way. It was formerly the Siemens headquarters and dotted around upper corridors were engineering trophies, bits of pulleys and nuts and bolts, now encased in clear showcases. 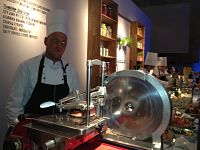 Slicing station at the Intercon buffet

It was all eating and drinking in Berlin those few days.  One night was the famous event-beater party at the Adlon. Another night InterContinental Berlin hosted a buffet that really showed imagination.  Fake ‘walls’ dotted in the ballroom were used as backdrop for working kitchens.  At the cold-cuts kitchen a chef was slicing meats on his big red Berkel machine.  Elsewhere they were making pasta, strudel, everything that hungry conference goers might need.  Just before the ITB travel event, you see, is the world’s most important hotel ‘money’ conference, the gathering place of those who own hotels, those who run them, and consultants galore who want to put one in touch with the other to everyone’s satisfaction. 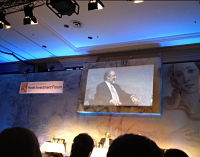 This conference, the International Hotel Investment Forum, generally known as IHIF, is like a school photograph of dark grey suits, discreet ties and socks.  Eagle eyes are looking out for an opportunity, but do not let anyone know whom you are watching or what you are interested in.  This is multi-million dollar business, gal. Every year there is a Lifetime achiever, and the 2013 choice is the delightful and oh-so-humble Majid Mangaliji, a tycoon whose hotels spread across North America, and Europe, and Japan, and yet he still telephones his father every day for a discussion (both his parents were there, I swear neither of them looking a day over 50). 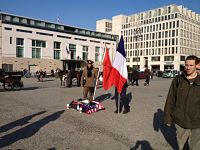 In Pariser Platz, life goes on…

But Berlin can take it all in its stride.  This city has seen, and does see, so much.  It can more or less cope with anything – even the ongoing delay of its new airport, which seems to have sunk into oblivion even before it has opened.  The city looks good, and prosperous.  Tiergarten, the park that was once a hunting ground of the Electors of Brandenburg, has been tidied up, and signage is so improved that you now know where you are and which direction you should be heading.  And despite its day-long presence of touts dressed in historic clothes (have your photo taken with me?), Pariser Platz, immediately to the east of the Brandenburg Gate, is remarkably free of litter or noise.  Well, Pariser Platz is, of course, the front yard of Berlin’s most famous luxury hotel, the Adlon.