Welcome to the delicious deli

Park Hyatt Tokyo is, as the gal has already said, a feast for the senses, which include taste. Let us start from the bottom and work up. At ground level there is a fabulous designer-deli, ‘guarded’ by some interesting gargoyles.

Lucky workers in the prestige office blocks and Municipal Government buildings around obviously pop in regularly for sandwiches, salads and cakes-to-go, and mothers (who often control the family purse strings, giving their husbands daily pocket money) come to buy whole gateaux, and hotel-produced juices and oils and bottles of Californian wine.

At the main level of the hotel, on the 41st floor, you have Japanese (come here for fugu blowfish, November through February), and all-day international bistro dining.

The signature restaurant, however, and one that has won awards galore, is the New York Grill.  Take a dedicated elevator to the 52nd floor and, at night, you emerge to silhouettes of bystanders looking out through ceiling-high walls at the magical wonderland that is the Shinjuku area of Tokyo, below.

The floor is black.  A woman in black guides you through to the bar area, where some sit, alone or with friends, up at a tall family table, perhaps merely having steak (though it is Hokkaido-special or Kobe) and chips (though they are classic fries, cooked in duck fat…)

Variously around the whole-floor complex of what is a giant 125-seat restaurant, plus the bar and a big open kitchen, are four pop art paintings by a senior Italian, Valerio Adami, born in Bologna way back in 1935. One is his version of Radio City Music Hall, one shows the New York Yankees, another is Carnegie Hall and the fourth is the Rockefeller Center.

Well, this lovely place honours the Big Apple, though your table is going to be set with Italian china (Ginori), French cutlery (Sambonet) and Austrian glassware (Riedel).  The manager, Daniel Ganser, and chef, Stefan Resch, both Austrian, may well come to say hello.

Foie gras with, on right, a tiny cube of foie gras-topped carrot marshmallow

But the wine list, advertising some of the 1,600 Californian bottles in the glass- walled cellar that is side on to some of the banquette seating area, specializes in California.  A bottle of Stag’s Leap Hands of Time 2008, produced by Stag’s Leap owner Warren Winarski, a former academic, to honour his winemakers, is simply poured, no fuss, no decanting or anything.

This is the last supper, gal (well, last dinner in Japan, this visit).  It will be simply simple, but chefs can never leave-it-be. Not good for the calorie counting, but Stefan’s Surprise, the amuse brought out and explained by the waiter, is a homage to foie gras.  There is a pinky fingernail cube of carrot marshmallow topped with foie gras, and a sizeable dollop of the FG sits atop a crouton.

Now we are ready to start our meal proper.  We have both chosen the Fresh boconccini, Iberico ham, Kochi tomato and thyme grissini starter, with my ham transferred to his plate.

There is something about Japanese tomatoes, by the way, that only Italy’s can emulate (my mind returns yet again to the tomatoes, eaten on an outside terrace, at the divine Castel Monastero outside Siena…)  Here the heirloom tomatoes are equally memorable. 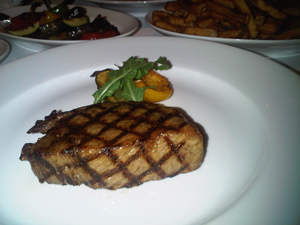 Japanese care about provenance. Think of the musk melons in Sembikiya fruit stall in Mitsui Main Building, think of the Shikoku strawberries I had in Osaka..  now it is time for our steaks.  My wagyu-3 Hokkaido ribeye, 200 grams and perfect, is simply delicious, as are the Mediterranean-style vegetables.

Oh dear, it is getting late and I have an early start in the morning…