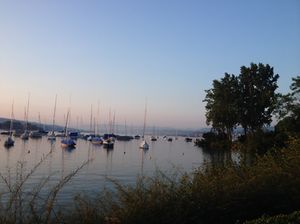 At any of the luxury Zurich hotels near to the lake, there is no better way of starting the day, when the weather allows, than a quick sprint or jog along the lake track. From Park Hyatt Zurich, it is five minutes east to the water. Turn right and within ten minutes you come to several massive boat houses, headquarters of the crews of established clubs and institutions. There are sculls, double sculls, and fours out by 6.30 am. The gal did not see any eights on this sighting, but surely there are some – probably crewed by bankers burning up physical energy before dealing with international exchanges for the rest of the day. 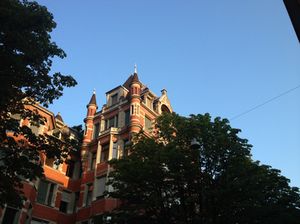 There are some absolutely gorgeous old houses in this area, as well maintained as you would expect in a city that is known for its prosperous residents. Being Switzerland, there are traffic lights for pedestrians, which the good burghers follow, minutely. As if in Singapore, I dare not cross without a green light, even though there are no cars around. There is also, again as in Singapore, not a single piece of garbage. As Jan Peter van der Ree, recently moved here from such places as Ho Chi Minh City and, lastly, Istanbul, says, he never realized that living in Zurich would be so agreeable. 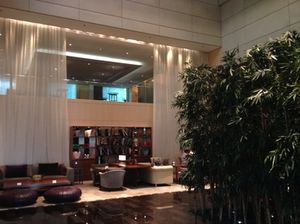 The lobby of Park Hyatt Zurich starts, as you enter, single height and ten, ten yards in, soars to three-floor height. Ahead, you can see up through all-glass walls, to upper floors, with people moving around: above front desk, to your left, enormous windows show grass on an upper terrace. Ahead, at ground level, there is a library nook with an interesting collection of books that includes Cool Hotels, Legendary Hotels, and 150 Best Bathroom Ideas, plus, as balance, a book on Colombian sculptor Fernando Botero. Right near is a massive looks-authentic fire, that must be a real gathering place in winter. 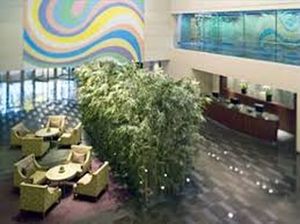 Looking back, at the Sol LeWitt, on the left

From the whole-height lobby, look back to the hotel’s entrance. There, you see one of the hotel’s 91 stunning art works, owned, like the hotel, by the Pritzker family.   This one, a massive 350 sq ft total, is by American Sol LeWitt, 1928-2007, one of the principal protagonists of minimalism – a fascinating catholic man, who worked as a night porter at the Museum of Modern Art MoMA in New York while studying Old Masters by day, he served in the Korean War and, with his wife, Carol Androccio, personally collected nearly 9,000 works by others. The record for one of his own works remains the $520,000 realised by the 2006 Christie’s sale of his Wall Floor Piece #1 in New York. 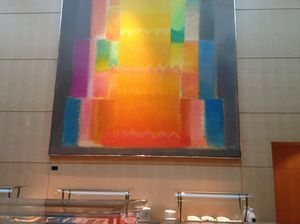 Bright colours above the breakfast buffet

There is another piece in the lobby, which I also love more on each visit. This is Lumière et Couleur, a 2004 acrylic on canvas by German artist Heinz Mack, 83 years old and still going strong. It is set high on the wall above the breakfast buffet, which means as you pick up your smoked meats and laugenbroten, or whatever, you look up and smile. Actually, while on the subject of bread, I must comment not only on Swiss hotels’ fabulous yoghurts and cheeses, and healthy pumpernickel-type breads, which I expect, but also the superb brown toast they all seem able to produce. This is a really pleasant surprise. 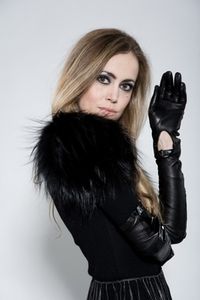 This luxury hotel is always having special events. Last Friday, being the 1st August National Day, most regular guests were away on holiday, but there were plenty of Swiss flags around. Looking ahead, the hotel will, as always, be official sponsor of the Mercedes-Benz Fashion Days Zurich, November 12-15, 2014. As always, too, three of the most fashionable people around will be Switzerland’s top lifestyle bloggers, Kristina Bazan, Xenia Tchoumitcheva and Sandra Bauknecht, whose blog is one of the best in trend-watching, anywhere – she is also another FPTW, fascinating person to watch, check out her husband, Dr Gero Bauknecht.