Montreal’s best-known person world wide is not the Quebec Premier, someone called Pauline Marois.  She is not even Céline Dion, the second-best known.  The best-known by far is Guy Laliberté, co-founder and brand leader of Cirque du Soleil.  He started out as a busker, and his many achievements along the way include serious poker, serious philanthropy (via his One Drop Foundation fighting world poverty through clean water) and being Canada’s first Astronaut.  He paid C$35 million to spend ten days in space.  On his way to Kazakhstan to take off from Baikonur, the gal is told, he was able to relax in one of her own favourite luxury hotels, Ritz-Carlton Moscow. 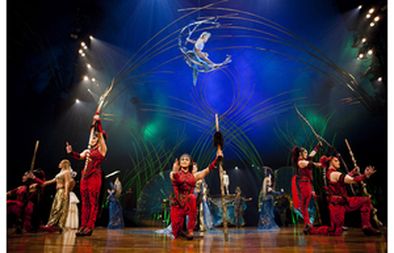 He is a brilliant organiser.  During his 2009 space trip, he telephoned many of his friends. One, who for some reasons wants to remain anonymous, told me he got a voice mail coming from a US number that he could not recognise.  He picked it up.  It was Guy Laliberté, calling via NASA. ‘For god’s sake, you have just missed your first telephone call from outer space’, said the message.  In fact our mutual friend has retained that message, for posterity.  He was, by the way, one of the many close buddies who accompanied Guy Laliberté to the blast-off. Waiting to get into orbit was the most nerve-racking moment of his life – so far.  Talking of which, I wonder how parents of Cirque du Soleil performers feel the first time they see their little darling somersault or seemingly fly through the space of the auditorium?  Shown is Amaluna, which opened in Montreal in 2012. 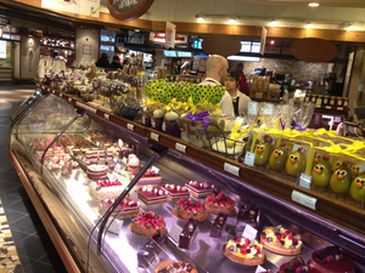 Now here is a tip.  Do not come to Montreal if you have no word of French in your repertoire, or if you are allergic to the language.  Some say the city’s language police are as mentally strident as Iran’s Revolutionary Guards are physically oppressive.  Here, if you want to translate, say, an Italian menu into English, you must have the French translation in even bigger letters.  Another tip: Montreal is neither for anorexics nor dieters.  The food is sensational, and fun.  Walk the eight miles of subterranean passages linking all the main central buildings, and the rail station, so you never need rise up, to ground level and the snows of winter.  It is not surprising there are a lot of overweighters.  I fell for Chop Crazy Creation, A Creative Lettuce Company.  Choose your fillings and they are chopped and blended in front of you, served in a disposable salad bowl or put into a wholegrain wrap, delicious. 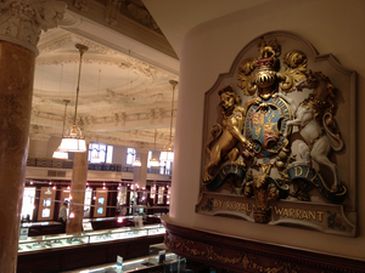 For seated munching, Ladies Who Lunch book ahead, uptown, for Maison Boulud in Ritz-Carlton Montreal.  An alternative is the charming Birks Café par Europea, in the raised rear part of the famous Birks jewellery store, started by Henry Birks in 1879.  It is really atmospheric to go past beautifully displayed collections of precious jewellery, and past the hotel’s Royal Warrant, to rise up a few stairs to the lunch-only gallery.  Some, undoubtedly, buy a few trinkets on the way in, or even more on the way out if they have enjoyed several glasses of the Val Ras Reserve 2010 wine grown by Jérôme Ferrer, one of the co-owners of Europea, which manages the restaurant.  I learn that Birks has exclusivity, for Canada, for Ivanka Trump jewellery, in all their stores.

Its food is quality rather than quantity, but you could always fill up on bread.  Soups arrive in elegant teapots, to be poured over whatever…  I hear that Birks allows absolutely no food smells, which precludes grilling and frying on the menu, and whatever is heated has to be done very slowly.  Regulars may well stick to bijou salads, leaving space for desserts, which are presented as a selection of filled shot-glasses on a tray. Actually I felt so good after lunching there, and so un-full I could have run straight up Mont-Royal, the peak that gives the city its name – but since it was about minus ten that was out of the question.   There were not, by the way, many business people lunching.

The business community, particularly younger members, seem to be relocating to Toronto (one friend, an Anglophone, says sadly that the English-speakers in Montreal are just getting older and older…).  But there are more than enough creators to fill those gaps. Cirque du Soleil, which has 1,300 artists around the world, employs nearly two thousand at the head office here.  Elsewhere, over 110 electronic artists, led by founder Sakchin Bessette, make Moment Factory work.  This company designs and produces such breath-taking modern art installations as a son-et-lumière bringing Gaudi’s Sagrada Familia, in Barcelona, to full-colour life – watch it on YouTube.  Moment Factory partners, as you would expect, with Cirque du Soleil and Céline Dion, plus Disney, Jon Bon Jovi and Madonna.  I would love to see it turn some grey-looking luxury hotel exteriors into futuristic art…  There is always something happening here in Montreal.  Look at the annual programme. Every last two weeks of February, incoming chefs arrive from one country plus one US city – 2013’s honorees were Argentina and Philadelphia.  Coming up this year, May 21-23, 2013 is C2-MTL (commerce+creativity), with Sir Richard Branson; June 7-9th, 2013, Grand Prix, mostly catered by Fairmont Le Reine Elisabeth; June 28th-July 7th, 2013, International Jazz Festival, and so on….