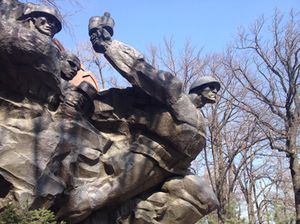 Statue, from a past era

The most thoughtful, and therefore more successful, luxury hotels offer a range of experiences. When the gal was staying at Kazakhstan’s newest hotel, the gorgeous Ritz-Carlton Almaty, in Esentia Tower next to Esentia River, a sightseeing trip was arranged by the erudite Balkhash Sagyndykova, who fortunately calls herself Bonya (doubtless her colleagues at Lausanne hotel school and then when she was working at Le Cheval Blanc in Courchevel preferred Bonya, too). First on the list was Park of 28 Panfilov Heroes, with its Soviet memorial to heroes of World War II (the names of the 28 soldiers are engraved on stone boxes along nearby Memory Alley, near the Eternal Flame). 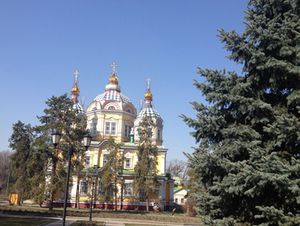 Zenkov Cathedral is also here – amazingly, the all-wood structure, finished in 1906, survived the 1911 earthquake which damaged everything else around.  There are always a few old people lingering around the entrance to the cathedral.  Inside about a dozen women, of all ages, are lighting candles, and praying. The wall behind the altar is a collage of icons, side by side.  We come out into the blazing sun.  It will be 25 degrees today. Toddlers are feeding hundreds of pigeons strutting on the pathways.  We drive away. The streets and pavements are spotless, cleaned every day.  Cleverly, to avoid turning on main roads there are deep U-turn underpasses. 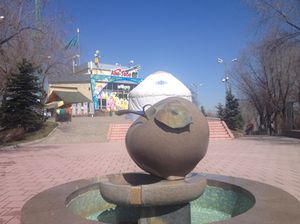 Signs of Almaty, on Kok-Tebe hill – apple sculpture, a yurt, a food kiosk

We try to go up Kok-Tebe, Blue Hill, but the cable car does not work Mondays.  We try to drive up but we need permission, for environmental reasons.  After 20 minutes of argy-bargy in Russian, we are allowed through, and up a narrow winding slope.  At the top is a life-size bronze of the four Beatles and I pose, between John Lennon and Paul McCartney (the Eduard Kazaryan statue, placed here 2007, is the only one to show all four guys). There is Kazakh music relayed from hidden speakers. I see a spot that typifies Almaty pleasure, a kiosk selling food, and a ceremonial yurt, a reminder that this is how so many of their ancestors lived, and a big stone apple, for Almaty was at one time the centre for production of the world’s tastiest apples, they said. 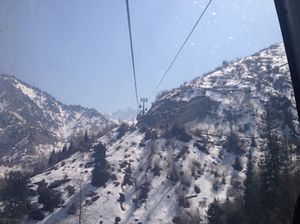 Soaring up to Shymbulak Ski Resort

Next is a visit to the highly successful Haileybury School, where 30 percent of the 540 students, ages five to 18 and no boarders, are expats.  It is a stunning building, designed by HOK, and it even has a helipad – Prince Harry took off from here when he went heli-skiing with his girlfriend (the school, like the Ritz-Carlton and its adjacent Esentia Mall, and like Shymbulak Ski Resort, where they went, are owned by Capital Partners, led by local entrepreneur Serzhan Zhumashov and his Monte Carlo-based Turkish partner, Burak Oymen).  Bonya and I are off to Shymbulak too, but we are going by Mercedes – the hotel is official host for the Mercedes-Benz Fashion Week here, in Almaty, April 25-27, 2014 (immediately before, April 23-25, 2014, the city hosts the Kazakhstan International Tourism Fair).  At the Shymbulak base, we buy gondola tickets, KZT2,500 ($13.73) return, for the 20-minute flight, soaring over valleys and woods in Austrian capsules, by Doppelmayr. 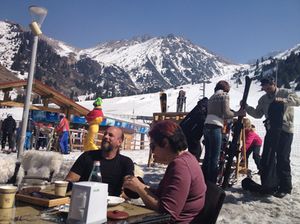 Basking in the sun …

At the top, 2,200 metres a.s.l., it is all activity, partly because of the glorious weather.  An eagle, his head covered, sits quietly as if listening, at least, to what is going on.  There is still plenty of snow and skiers and snowboarders hurtle down. An L-shaped building houses side-by-side restaurants, pizzas and coffee shops and local fares, and today their customers prefer to sit outside, working on their tans.  We sit next to a woman whose hair matches her plum-coloured sweater.  Her man eats a gigantic hamburger but she has a bowl of borsch or something. About three quarters of the several hundred lunch eaters are locals, all speaking Russian. 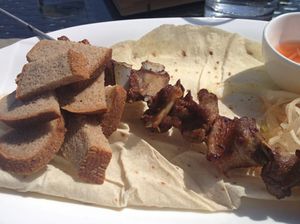 We eat local.  Bonya, a self-confessed carnivore, orders a giant steak, which comes on a big skillet, unadorned except for a side bowl of grilled vegetables, which she leaves (apart from a slice of eggplant).  I order what is billed as a ‘Soviet kebab’, and here is the result, lamb with lots of bits of bone still attached, a vinegar dipping sauce, raw onion, bits of healthy brown bread and a thin crepe. We talk luxury hotels, especially Ritz-Carlton Almaty, and lap up every minute of this glorious ambience.