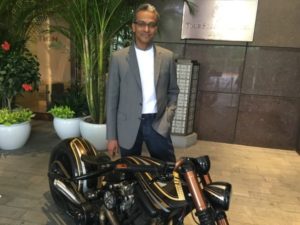 Andrew de Brito, the Malaysian would-be lawyer who somehow got diverted, via waiting tables at the then Regent Kuala Lumpur (under legendary GM Alberto del Hoyo), came out as the gal was admiring the German motorbike, marked Beringer, that stood outside Four Seasons Chaoyang. It is one of the exhibits in Poly Auction’s twice-yearly events, held at this luxury hotel. Estimate for this bike, which is in the Science and Technology Antiques, Sportscars auction, is put at anything from 1.9 million to 2.4 million RMB. Having such auctions every six months is good for local business, but one challenge is that the authorities do not specify the date until about a month beforehand. 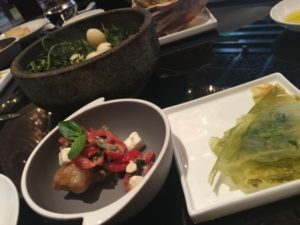 Sample tasting dishes, before the meal came out

In fact Poly – technically Beijing Poly International Auction Co Ltd – is itself owned by the authorities as part of China Poly Group Corporation, a $40 billion state enterprise that also surprisingly has arms dealing, and real estate. Poly is the world’s third largest auction house, after Christie’s and Sotheby’s, and it dwarfs its China competitor China Guardian Auctions, which is building the future PuLi sibling hotel, The PuXuan Hotel and Spa, Beijing Wangfujing. Actually having auctions here, in the hotel, is part of its regular daily lobby life. In between auctions there are pop-up exhibitions and stores. A recent display by Amsterdam-based shoe company O’Quirey – see photo at top of this story – led Andrew de Brito to becoming a shoe collector. What new fascination will he pick up from the next pop-up, coming from Yiwen Studio, a local designer? 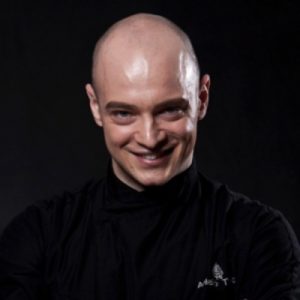 Today he is wearing blue shoes, O’Quirey, of course. MIO restaurant is mainly deep burgundy coloured, with lots of clear glass, and black glass tables. Chef Niello Turco, from Naples, comes bounding out, full of enthusiasm for some of his creations – it is really quite difficult to stop his passionate monologue of creative dishes, and then he comes out again with a can of Valenti oil that he has just got and we absolutely must try some. He sends out lots of pre-meal tasters, including tiny deep-fried squid and lightest zucchini blossoms, served in a paper bag. As the meal progresses I am especially impressed by Andrew de Brito’s main course, pork and apple. Really? Take a hollow wheel-shaped clear plastic dish and put scented lemon leaves into its base hole. In the upper concave, place a peeled apple which has somehow been stuffed with pork… 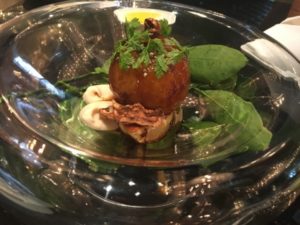 It is not for nothing that this is currently Hurun Report’s top life-art hotel in the whole of China. This is a luxury hotel where things are always happening. Coming up before the end of the year, when the final authority permits are obtained, is the opening of a new rooftop bar-lounge, as yet un-named. I was taken on a tour of the massive indoor-outdoor space, which is, thanks to designer Strickland, variously sexy cocktail vibe, like Four Seasons Abu Dhabi’s Zsa Zsa space, and clubby sit and chat, or dance, or try oysters. Part of it has both mezzanine and upper-floor sections and, in all, it will be licensed for up to 1,200. Yet again Four Seasons is, as I saw at its Dubai IFC hotel (with diner and more), lots of fun.  Now WATCH THE VIDEO, BELOW