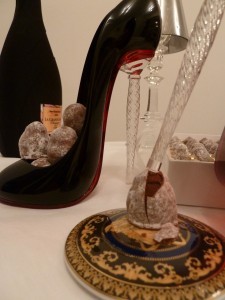 Of course what a gal really feels like at the end of this last week (in Nice, and at ILTM in Cannes, with so many divine luxury hotels to boot) is a glass of champagne.  Oleg K, the Russian who has taken Dubai by storm, swears that his favourite flute looks like a shoe.

He sent me a photo of it but I am still not quite sure how one drinks the Veuve-Clicquot, other than straight out of the bottle.

And what others want, after such stress (the hype and worthwhile activity of the Riviera at this time rather than non-stop bubbly) is to get away from it all. 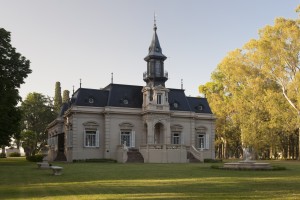 Massimo Ianni, who is busily converting Amsterdam’s music conservatory into a hotel (The Conservatorium) and, simultaneously, London’s grand old Café Royal into another hotel (called, surprise surprise, Café Royal), sent me a photo too.  This is a villa he personally owns near Salta, Argentina. Dreaming dreaming, but I will be back in Argentina next year. 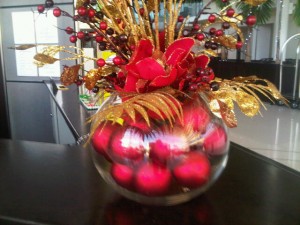 Anyway, we, Edmund the Rimowa and the gal, have left Cannes, and Nice, and the Côte d’Azur.  We decide a stop-over is called for.

The night at Heathrow is wild and windy, dark and full of imaginary demons.  We check into London Heathrow Hilton, a really comfortable overnighter – and it has a half-hourly free shuttle to terminal five (and British Airways) and it is fun. 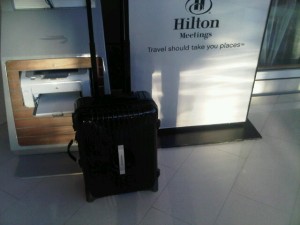 Checking out, a simple single case for (arguably?) the world's most travellin' gal

While I wait, all of two minutes, to check in, I note fish have been removed from a bowl to make way for Christmas baubles, and palm trees, real ones of course, are festooned with Christmas lights.

Later, the fish and chips (not from the bowl, this bit was far too big) are magnificent, light crunchy batter and the chips flavourful, crisp and, almost, enough. 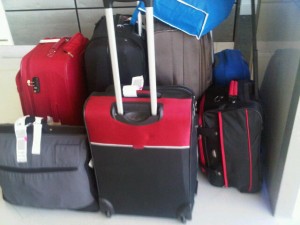 Why does a guy need so much baggage (and horribly unstylish, to boot)?

Then, today, we continue our journey.  Edmund the Rimowa waits patiently by the British Airways check-in desk.  We have only travelled together for eight days on this trip, but we can manage up to three weeks without extra space required.  The guy next to me, also waiting for the shuttle bus, has slightly more baggage.

What on earth do men actually carry when travelling? Every book in the library, a spare set of girlfriends to keep’em company along the way, golf gear for a foursome, a lifetime supply of Gillette, the entire Sir Paul Smith Winter-Summer fashion collections for the next three years, or what? 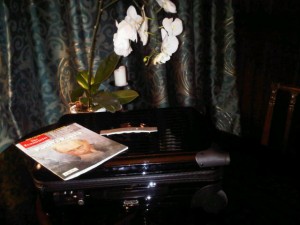 Home... to a few of my favourite things

Or perhaps the owner is a collector.  One of the guys I have breakfasted with in the last few days, he who should remain nameless, has a wife, one wife of one, who collects pepper mills.  She has 620. Six hundred and twenty. This includes the whole range of Peugeot mills, which must have cost even more, in total, than a Peugeot 306 GTi-6.

Anyway, finally we are home. My beloved orchid is still flowering, My Man is livelier than ever, and Edmund the Rimowa is allowed to lie on the dining table for a little rest….