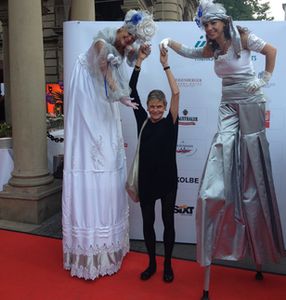 An English lady dwarfed by the Dutch

Oh what fun, to feel like Jonathan Swift’s Gulliver when he lands on the fictional land of Brobdingnag, where everything is colossal. These lovely ladies have come from the Netherlands to welcome guests to Frankfurt’s historic centre-city luxury hotel, Steigenberger Frankfurter Hof, and they included the gal in their welcome. Tonight is special. Frankfurt is hosting the mammoth IMEX, international meetings exhibition, and this hotel is hosting a party for the world’s top meeting planners. The weather is playing its part magnificently, so the party is being held outside on the fan-shaped Ehrenhof courtyard. Look around, at the five floor building that dates back to 1876, and you see four larger-than-life stone gargoyles of Alantes, on the outside of the third floor. 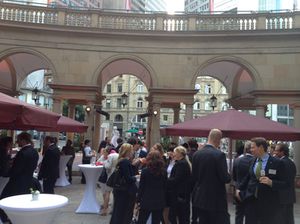 Steigenberger’s party on its Ehrenhof terrace

Higher up are big initials AS, for Albert Steigenberger, who bought the hotel in 1930 and if outsiders wanted a tour he charged them, with all money going to the poor. On March 22nd, 1944, the hotel was severely bombed, and Steigenberger was first on the scene to inspect the extensive damage. Rebuilt, it once again became centre of the city’s life, with some well-known GMs in charge, Peter Leitgeb, Gerhard Mitrovits, Reinhard Heermann and Armin Schroecker. Now it has an equally significant GM to bring the old lady right up to the present. 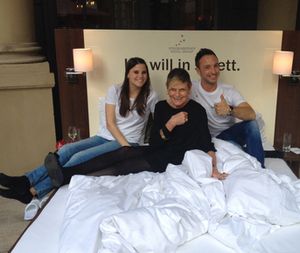 Bed on the terrace

Moritz Klein is actually Bavarian, but he says that when he arrived here in Frankfurt three months ago he was far more warmly received than he would have been in Munich (he returned to Germany, after years in the Middle East, partly because of his sons’ schooling and he too is thrilled to be ‘home’). Everyone has welcomed him, including the people who run the massive Frankfurt convention centre, the Messe, which runs shows on books and cars as well as meetings. Moritz Klein even manages to make selling meetings ‘fun’. Tonight at the party he has a Sixt car, with hostesses in the recognisable Sixt orange, and an appeal for Regina Sixt’s Drying Little Tears Children’s Aid Foundation. There is also a  bed, for lounging. 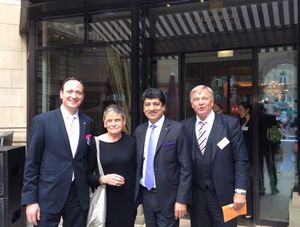 He was up there on stage with his boss, Steigenberger head Puneet Chhatwal, who welcomed everyone. This is Steigenberger’s year of concentrating on meetings, he said – and a few hours later it was announced that another of his hotels, the Steigenberger Frankfurt Airport Hotel, which has 40 meetings rooms, had won IMEX’s top hotel award of the year. The guests tonight were also entertained by a live band that went on until at least 11.30 pm. I know because someone told me: I had an article to finish so had to repair to my room, 458 (designed by Markus Diedenhofer with considerable help from Dora El Chiaty) to nibble on a super wiener schnitzel while I wrote. Downstairs, others enjoyed the hotel’s party buffet. 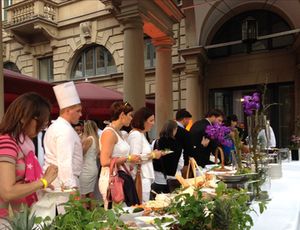 Dinner at the party’s buffet

I have spoken before of how central this hotel is, for banks galore, each one headquartered in yet a more significant highrise. Frankfurt is a weird city. By night only about 700,000 live here (including 5,000 Japanese), but by the working day this number swells to well over a million. Banking heaven, you might say. There are 190 of them, and those that work in ’em need all the support of, say, tailors and coffee shops, and restaurants and shops.

During my stay in town I saw lines outside coffee bars as they waited to pick up a latte before heading to yet another banking meeting. 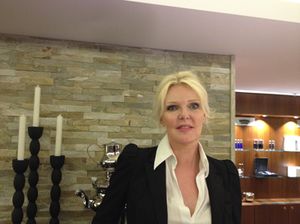 This visit I really got to know the spa manager of this luxury hotel. Annette Mansfield has worked at Trump, and at The Plaza and The Palace, all in New York. Here, she runs a great local operation. Come in for a one-hour beautification, with different people working on your hair, your face (for an MBR quickie), your nails. Hey presto, after that you are ready to go and buy another bank.