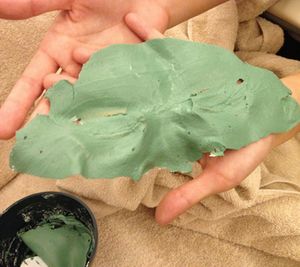 Here is something you thought you would never see – the gal’s face mask (not, this is NOT a death mask). It is what was pulled off her face after a necessary part of the MBR, Medical Beauty Research, treatment done by the elegant Satomi, from Japan, in the brand-new super-spa at Steigenberger Frankfurter Hof in Germany. Who would have expected such a modern and scientific offering in a classic luxury hotel that proudly carries its 1876 heritage.  But the Steigenberger brand owners, the talented El Chiaty family, realized they had to invest, and heavily, in a 21st century spa. They called on Ingo Schweder and his company, GOCO, to develop the spa, which has stupendous wet areas. 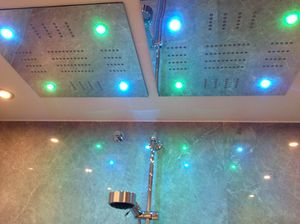 To show how up to date this hotel is, a couple of the rooms – like 458 – have futuristic sexy spas that could well become a necessity for luxury lovers.  Go in and the ceiling lighting changes through subtle hues. Press various easily-operated buttons to add fragrance and music. I started off with birdsong, then went into classical tunes that my man could have instantly recognized, but he was the other side of the continent, alas.  Of course I spent far too much time lathering and scrubbing, it was just such fun.  I also had clever real-look fires in both the salon and the bedroom: turn one switch, flames flicker and smoke, or water steam, comes up through the logs. 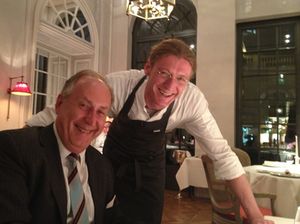 Anyway, dinner was waiting, and my host Armin Schroecker (one of the best foodies in the hotel world) brought out first Restaurant Français chef, Patrick Bittner, and then the sommelier, Franck Mouzon. M. Mouzon suggested a glass of rosé Champagne, which turned out to be from the house of Jean-Claude Mouzon, yes, his father.  Where else does a top sommelier serve his family’s own bubbly? 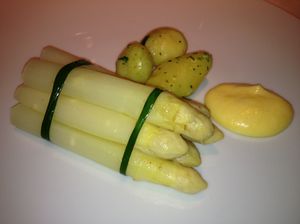 Asparagus with boiled potatoes and hollandaise

Everywhere in central Europe, and beyond, is into an asparagus empire (wonder if that face mask of mine had asparagus in it? The chef sent out vegetarian canapés, all cauliflower, including the tiniest, pinky-fingernail of a cauliflower mousse bite. The breads were memorable, with strong-flour slices of Swiss baguette, bacon and cabbage bread, barley bread, Sylt white (actually it was brown), olive studded and tomato-filled. There were four butter slabs on a slate, no-salt, light-salt, strong-salt and seaweed.  I went on to – asparagus, the classic German way, with boiled potatoes and masses of home-made hollandaise, which presumably uses up some of the egg yolks from all those egg-white omelettes. 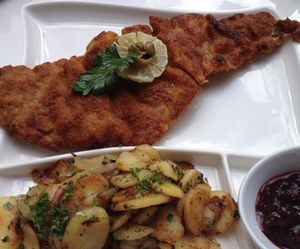 Another Germanic specialty seems to be spreading world wide, and that is the wienerschnitzel.  OK, you say this is surely Austrian?  Well, Armin Schroecker happens to be from near Salzburg, and the wienerschnitzel here, he says, is one of the best in the world. At lunch the following day, sitting in the elegant stone courtyard of the hotel’s Oscar’s restaurant, soaking up the early-summer sun, he of course had to have one. 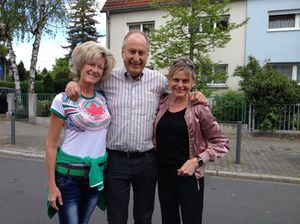 Armin Schroecker and his fiancée Anahid

And then he and his lovely Anahid – whom he marries on June 10th, 2013, at ten minutes past 10 am, went off to a football match. They dropped me, on the way, at the Steigenberger Airport Hotel, so that I could go running in the seemingly-endless forest all around.  It is amazing that a luxury hotel can operate a really good airport product (an entire cancelled US Airways passenger melée had just been bussed in) and also offer gorgeous woods all around.