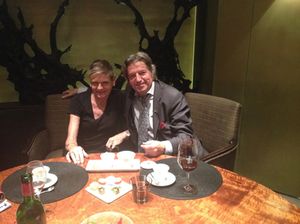 The king of luxury Benelux travel, Robrecht Willaert, holds court, pretty regularly, in Sea Grill, the ultimate luxury two-star Michelin restaurant in what is technically a four-star hotel, Radisson Blu Royal, Brussels.  As he tasted the 1989 Ch Carbonnieux Blanc, Pessac-Leognan, from his own cellars, he regaled the gal with bon mots. Today, travel is a buyers’ market, he said.  But with all that information out there online, the more that buyer needs help.  Today’s travel agent is needed more than ever, to counsel in the way that pastors did in the past. 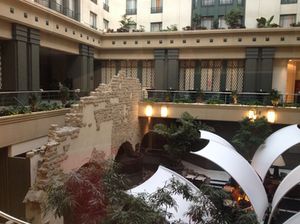 As he lunched off a succession of beautiful and scrumptious seafood tastings sent out from Yves Mattagne’s kitchen, he continued with his thoughts (the customer is king as long as the customer behaves like a king…). Robrecht Willaert knows what he is talking about.  His Travel Magazine, which appears every three weeks in both Flemish and French editions, reaches 94 percent of all travel suppliers and operators in Benelux. His annual TM Travel Awards, nominated by the industry and chosen by a judging panel, is an annual November sell-out at the Antwerp Hilton.  I had to tear myself away, still wanting to know more about his recent trips to Jeju Island and to Vladivostok.  I went into the atrium of the Radisson Blu Royal, built as if to house a section of the original city wall, dating from 1134. 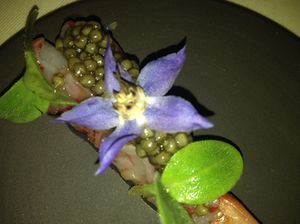 The atrium soars up, to its glass roof seven floors high (I was in room 621, looking into the atrium, highly desirable as there is so much going on there and it is light, bright and big – and, a definite plus, being a Business Class room it gives access to a lounge corner, next to the elevators, with 24/7 free water and soft drinks, tea and coffee, and yoghurts).  Actually what I really did not need was any more food.  After working out in the hotel’s rooftop Technogym, also 24/7, it was, well, time for dinner. This was to be my Michelin Four Stars day. Back in Sea Grill, we started with one-bite crab fishcakes, and glasses of Laurent-Perrier Millésimé 2004, which some kind fans, anonymous thanks to the handwritten note, had put in my room. 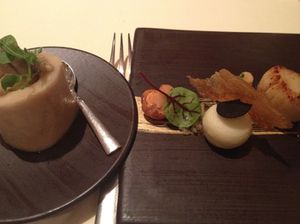 A second amuse was a prawn in a pot next to a shrimp, decorated with flowers.  Every single bite here is delicious – do not miss the seaweed butter, even if you have it alone, without the beer- or red wine-studded breads. I was now with Gaston Gellens, another food-loving Belgian (are there any others?) who runs this 281-room hotel, and we actually went on to red wine, first 2011 Domaine Chignard Fleurie Les Moriers and then Luciano Sandrone Barbera d’Alba 2011. My chosen starter arrived, Dieppe scallops with grilled bone marrow. Eulogistically heavenly. 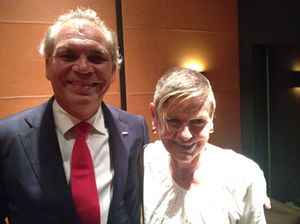 Gaston Gellens, with his head office bosses, decided to make his hotel Four Stars in 2012.  This was actually a ‘step down’, but by going down from five he replaced the city’s five-star bed tax of €9.28 by the more-reasonable four star’s €7.62.  He was able to sell rooms to the pharma(ceutical) business, not allowed to stay in five star hotels. Results? His rates have remained the same but occupancy has gone up three percent.  A waiter, employed like all his colleagues by Yves Mattagne rather than the hotel, started preparing my tuna tartare table side – I had deliberately chosen one of the ‘classics’, warranting a separate section in the extensive menu.  It came as a generous cake, with a side salad and with frites.  How could anyone leave Belgium without experiencing at least one of the country’s great institutions?  Another, by the way, is the national football team, which has done more for the country’s pride, and global awareness, than its entire tourism marketing budget for the last decade. 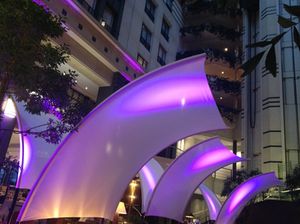 The atrium by night

Sea Grill was packed, not a table to be had. I reckon I was the only foreigner there.  Remember, as I said yesterday, Belgians love good food and good wine (also, far too many of them love smoking but that is another story).  Having eaten four star cooking, divided into two meals, I felt really good. As we left the restaurant, the atrium of this luxury hotel had its night lights on.