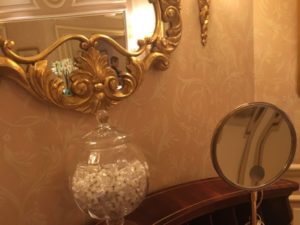 Great people, and dynasties and fads and fashions, come and go but great rivers flow for ever. The same should be true of luxury hotels but there are some that lower in tone while others, led by Four Seasons George V in Paris, just get better and better. Every time the gal visits there is something new, led by the latest floral display from that incredibly talented genius Jeff Leatham – apparently his Christmas array last December brought back the 12-foot tall blue glass-look penguins of 2015, but added other animals too. Right now it is spring and the lobby and courtyard are a blaze of yellow. See the video below. Flowers are everywhere in this 200-room hotel, including the ladies’ washroom (do the men have the same?). 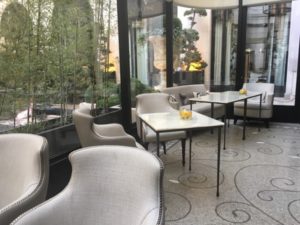 When Jose Silva moved here as GM, in 2014, he quickly started on revitalising the hotel’s food offerings. The hotel was already the best but that was not good enough for this creative Portuguese, who does not seem to worry about any awards unless they are Michelin. Looking at the hotel’s inner courtyard from the entrance on avenue George V, he built an extension conservatory on the right side that gives a very sleek, very modern, La Galerie area, where there is now a breakfast buffet to complement the à la carte that remains in Le Cinq. A mirror-image conservatory juts out from the left side of the courtyard: this, with the room next to it that was once a banquet room, now makes the absolutely gorgeous Le George. Pierre-Yves Rochon has given Le George a gently-barrelled ceiling, form which hangs an 80-light Baccarat chandelier. Leather top tables have no linen covers, and servers wear their own clothes, which, being here in Paris, means they look tout chic. 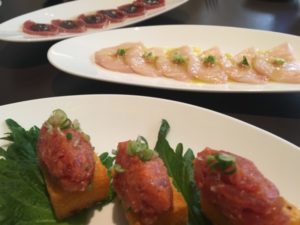 Add a lovely bubbly chef, Simone Zanoni, who once worked with Gordon Ramsay, and a menu that covers much of the Mediterranean, and it is no surprise that the 60-seat restaurant is full lunch and dinner, with such luminaries as the CEO of one of LVMH’s most prominent companies as well as tech startups with earrings and body art, and 50% of those lunching and dining here come regularly. All plates here are for sharing. Our lunch started with a selection of crudos, including saffron arancini (deep-fried left-over risotto) topped with tuna tartare; yellowtail kingfish crudo with lemon, and semi-cooked red tuna topped with truffle petals. Along the way, I loved the onion tarte tatin, which turned out to be whole crystallised onion with spoons of parmesan sorbet – as shown at the top of this article – and the octopus cooked over a wood fire, and the salad of baby spinach shoots with red prawns, truffle and parmesan. 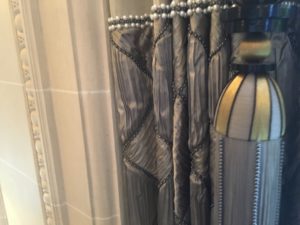 Curtains in La Galerie are dressed with pearls

No wonder Le George gained a Michelin star within a few months of its late-2015 opening, which means this luxury hotel is now supreme in having five Michelin stars. This summer, from June, there will be five-star dining, outside in the main courtyard. Tables will be sold offering three-star food from Le Cinq, or one star from Le George, or one star from La Galerie. On the way out, after lunch in Le George, I continued to discover yet new delights. Look at the four Lalique cabinets here, enthused Jose Silva, who seems just as responsible for the design of all the restaurants as M. Rochon – and he insisted on taking me back to La Galerie to see how elements of the elegance of the 1930s are being introduced. See the new metal table legs, he purred, and look at the curtains, modelled on dresses by Coco Chanel, Elsa Schiaparelli and Madeleine Vionnet and their colleagues 80 years ago. And yes, the curtains even wear pearls. NOW LOOK AT THE FLORAL VIDEO, BELOW