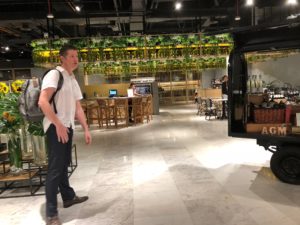 This could be said to be a non-story about a luxury hotel, admits the gal.  Four Seasons Hotel and Residences, Kuala Lumpur, opens June 30th, 2018, but although Mr and Mrs Isadore Sharp were able to visit a couple of weeks ago and, apparently, dance in the ballroom, no-one is currently being allowed in. And since much of the 77-floor building, right on the edge of Kuala Lumpur’s KLCC and its gorgeous park.  Never mind, the main ground floor and basement retail is already in opening stages, and hotel GM Tom Roelens was only too keen to do a show around. 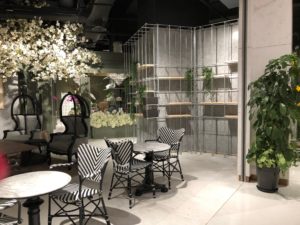 One of the lowest-level eating areas

A massive Robinson’s department store anchors the ground floor but it seems that much of the lowest-level, basement, has a touch of Christina Ong about it, not surprisingly since her husband, B.S. Ong, bought the land for the whole development and he is now one of its four owners. The main tower, by the way, will hold 209 rooms, on floors six up to 18 (with lobby, wellness and outside pool on the sixth floor). The tower will also hold 242 privately-owned residences, with one to five bedrooms, some private pools, and some with elevators that bring owners directly up to their living rooms. All these owners have full service from the hotel, and they have a big rooftop pool, exclusive to the residents. Eighty percent of these residences are already sold, half to Malaysians. 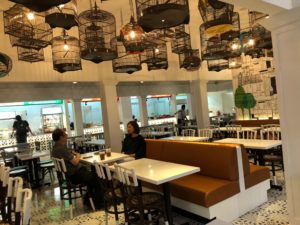 And another, with birdcages

And, in addition, there will be 27 long-stay hotel apartments. It will be, I can see, a lively operation. Stay or live here and Robinson’s will deliver. Alternatively, head down to the basement, which has food trucks galore – see one, above, bearing the name Atlas Gourmet, which is one of the many Ong family names (with the Ong touch throughout, expect such dishes as this gorgeous tuna tartare I had at Christina Ong’s COMO Dempsey freestanding restaurant in Singapore). Here, I already love the gourmet food store, with a butcher’s counter, and a restaurant with dozens of birdcages hanging overhead. There will be many different food styles, plus a delicatessen and a pastry shop. The dining facilities will definitely attract outsiders, both to the basement, and the hotel’s own restaurants. 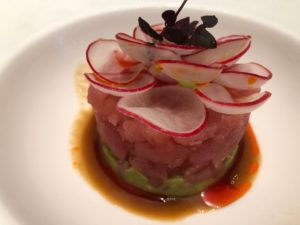 Back in Singapore, tuna tartare at Christina Ong’s COMO Dempsey

Tom Roelens sees many leisure guests doing two-centre holidays, here and Four Seasons Langkawi, which is being tweaked slightly by its original designer, Bill Bensley.  Fly in to Kuala Lumpur for a few days sightseeing and then go to the coast, or vice versa, or sandwich Langkawi, and its beaches and mangroves and natural habitat, in between before-and-after Kuala Lumpur. And, of course, whenever a new Four Seasons opens, there are addicts who fly in from everywhere, just to experience it – and perhaps dance in this luxury hotel’s ballroom (which does, by the way, hold over 500, ideal for Chinese weddings).