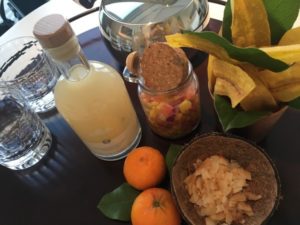 The gal has flown across the Atlantic, found immigration at Miami somewhat eased – thank goodness – by banks of do-it-yourself kiosks, and travelled north to Surfside. Where is that? Surfside is north of Miami Beach, south of Bal Harbour, and in the 1930s and decades following was renowned for the celebrity hang-out known as The Surf Club. Now the quaint club building has been vastly expanded and brought into the 21st century with a highly expensive ‘bang’ as the newest luxury hotel, with 77 rooms and suites in the Four Seasons portfolio. It is, honestly, absolutely gorgeous. See the video below for a tour of room 1203, looking out far over the Atlantic. 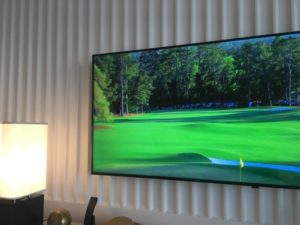 The main colour in the room is the television

See the sunset view, above (with a view of the adjacent new residential block, on the right). See a reminder of where you are, with the welcome on the left: this is what you need to make the Club’s signature Surf Club Mangareva, a 40°-proof cocktail with apple spirits, lemon, lime, honey, coconut milk and brandy, and snack off ceviche with fruit, and vegetable crackers. This was, by the way, practically the only colour in the entire room. Designer Joseph Dirand, who only wears black, specialises in colour-free off-white and taupe. Here, rooms, and entire bathrooms, are formed of travertine stone streaked with the lightest possible grey – though I did get colour on my Samsung when it showed golf at Augusta GA. 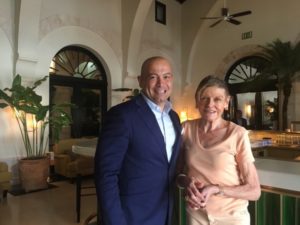 Reed Kandalaft, in the bar

Dirand specialises in textures, so my ceiling had ribs, my walls had vertical flutes, there were waves on the front of bureaux – all self-coloured (the exception was the mottled moss green on the front of the minibar, which matched the sofa at the foot of the bed). Want more colour? Well, look out at the stunning ocean, or head down to the public areas on the ground floor. As GM Reed Kandalaft explained, the gorgeous bar, with its full-size palms, is half of the Surf Club’s original ballroom: the other half is Le Sirenuse, the Italian restaurant that the hotel runs under licence from the Positano original (sadly, I just missed that hotel’s owner, Antonio Sersale, who returned to Italy two days ago after spending weeks here making sure that this Florida luxury hotel would do justice to the Sirenuse name, which is certainly does). NOW SEE THE VIDEO, BELOW