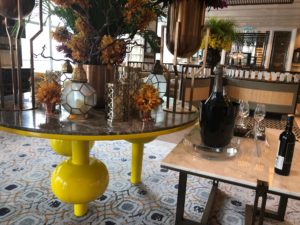 Looking into the Lounge

It is always a joy, says the gal, to find a luxury hotel where its onsite boss, the ‘GM’, is so passionate it is tempting to think that person owns it.  This is certainly the case at one of the Malaysian capital’s newest hotels, Four Seasons Hotel and Residences, Kuala Lumpur. GM Tom Roelens (above, in Bar Trigona, named for Malaysian bees) was nurturing the 209 room hotel for about a year before it opened, on June 30th, 2018.  He had just had the good news that the bar has won the Ketel One Sustainable Bar Award 2019. Yes, this has been a good year, boosted by a tremendous opening party that apparently had every one of the Royals from Malaysia’s seven States.  Other pointers help this hotel, too. It looks good. Restaurants and bars are designed by AB Concepts: see how a dayglo yellow table highlights the lobby lounge, on floor 6-B. 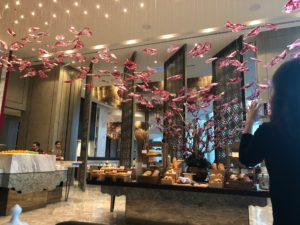 We dined in the lounge, starting with a surprise brought personally, with a big smile, by chef Junious Bickerson, who had previously been in the Maldives.  He carried out, with great glee, his first-ever presentation of Malay caviar, TLUR (yes, there is a video below of that, too). We obviously needed shots of vodka to do justice to TLUR, named for the Malay word for egg, ‘telur’, and then we went on to Haut-Brion’s 2014 Clarendelle, specially labelled for the hotel. As we started, with cod ceviche, Tom Roelens shared how the bar’s team, led by Ashish Sharma, uses local honey instead of sugar for its specialty Trigona Old Fashioned. I also love the colour in CurATE, on the same floor. Glass butterflies suspended from the ceiling are complemented by real flowers, and the overall effect is that breakfasters often take several images before even helping themselves to food – see another video below. 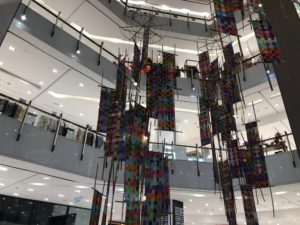 Atrium of the shopping mall

The corridors and bedrooms are soft-hued, by Wilson & Associates: see a video below.  1201, a 116 sq m Ambassador Suite, had walls of pale grey fabric or smudged marble-look glass, and the entrance foyer wall was bedecked with 3-D grey ceramic rose heads. I added another ingredient to the Girlahead Luxury Monitor – wooden coat hangers that are satin-smooth, paired with ample satin-covered, and plenty of them. The pluses in this hotel, in which B.S. Ong has a sizeable share, go on and on. The LifeFitness gym is 24/7, and the spa introduced me to Subtle Energies, a brand that I immediately liked. It felt good and people kindly said I looked good (every girlahead needs friends, even if they exaggerate!) 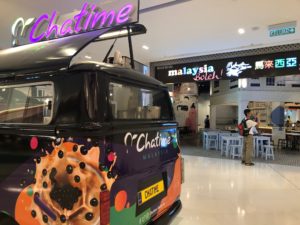 Another special is that you can go directly from the hotel into a superb shopping mall. Although anchor of this shopping mall is a Robinson’s department store, the basement is a treasure house of food stalls, carts and proper restaurants, some of which are at least associated with the Ong dynasty. This is clever. Kuala Lumpur’s success stories and status seekers shop down there, then rise up to the luxury Four Seasons hotel.  Some of them are even astute enough to head for the hotel’s Tiffany-themed afternoon tea, served on exquisite Tiffany porcelain. Aficionados then, I’m told, ask where they can buy cups and saucers, and more, to have at home. NOW SEE, IN ORDER, SUITE 1201, AND MALAYSIAN CAVIAR