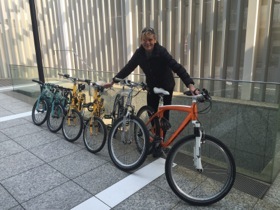 Bikes in all sizes

Oh what choice – a frequent refrain for the gal when she stayed at Four Seasons‘ boutique luxury hotel in Tokyo’s Marunouchi district. Do you have a bicycle? Yes, there are masses, take whichever you want, and do you want a map, and water, and perhaps a picnic to take into the Imperial Gardens? No need for map, no need for water, thank you, a little bow, and it was not exactly the weather for a picnic. The silver BMW almost seems to know its own way, turn right, and right again, under Tokyo station, on and up to the Imperial Gardens. It is really easy cycling in Tokyo. You use the pavements/sidewalks, but you have to adhere strictly to traffic lights, even if there are no vehicles in sight. 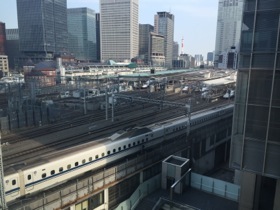 Looking straight down at Tokyo station

This 57-roomer is the only hotel I know where you look straight down at a plethora of rail tracks, with constant coming and going. There are Shinkansen, for instance, leaving about every ten minutes for Kyoto, Osaka and beyond (all have 16 carriages, generally full). There is also, since March 15th, 2015, another Shinkansen, to Kanazawa, apparently so popular you cannot get a reservation for weeks, at least. When the hotel, designed by Yabu Pushelberg, opened in 2002 it had its reception on the seventh floor of a 31-floor building owned by Pacific Century Cyber Works’ Richard Li. In 2007 he sold the upper part of the tower and its offices to Singapore’s sovereign fund, but he kept the lower seven floors of hotel, moving reception down to the ground floor. 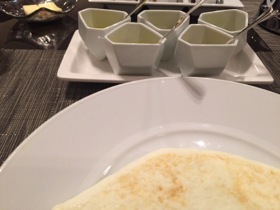 The seventh floor is being reconfigured. It still has its 24/7 gym, a casserole when it comes to equipment types but it has lovely onsen baths, one for men, one for women. When I was there the seventh floor ballroom was temporarily turned into a restaurant, with marvellous cherry blossom boughs to compensate for the lack of daylight. I asked for olive oil and look what I got. ‘I have brought you five different ones so you can choose’, she said with a bow. I loved the Japanese one, It’s Life, by Shodo Shima San (the Japanese can produce nearly everything, including wine – try Chanter 2012 Musckat Bailey-A Plus de Hosaka from Kagawa Prefecture, Shodoshima Island). 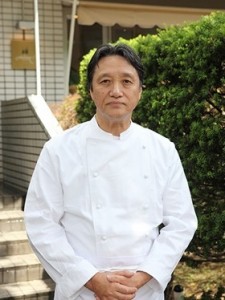 But soon, very soon, sometime this month. this luxury hotel will have its own designer restaurant, under the consultancy of Hiroshi Nakamichi of the Relais & Châteaux Molière in Sapporo. Richard Li, apparently, chose André Fu as designer and, as a confirmed gourmet, it is also Li who is bringing Nakamichi-san to his hotel. That is all very well, but what did I do for dinner that night at Four Seasons Tokyo at Marunouchi?