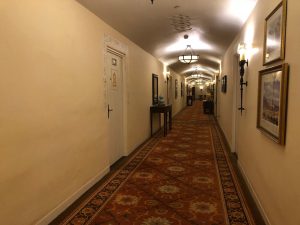 Corridor leading to my room

The gal always relishes the prospect of a city hotel and country resort, one after the other and both offering luxury in different ways. This particular weekend kicked off at Four Seasons Resort The Biltmore Santa Barbara, a marvellous mission-temple of a country mansion, set on 22 seaside acres in Montecito.  It should take around two hours to drive, north-west from Los Angeles, but on weekends you need to allow more.  It has such history, built in 1894 as the Santa Barbara Country Club, and later, in 1927, becoming the Santa Barbara Biltmore.  It was bought in 2000 by Beanie Babies king Ty Warner and, as he has done at Las Ventanas al Paraiso in Los Cabos, he has spent well, well a lot, in every detail of restoration (is it true he had the tiling by the main garden swimming pool re-done several times until it reached his standard?).

This is the retreat for bracing sea air and long walks along the beach – see above – and working out in an excellent 24/7 fitness that has masses of fresh fruit, including bananas, and two Pelotons bearing big signs about which sign-in and password to use (without those, investment in a $2,000-plus Peloton is frankly useless).  No, here GM Karen Earp and her team have thought of everything. There are so many room types, from bungalows to villas, in this 219-room hotel.  I loved #209, upstairs in a two-floor block: it was really folksy, with some stencilled walls, and a magnificent corner fireplace, plus a totally private outside terrace – see the video, below 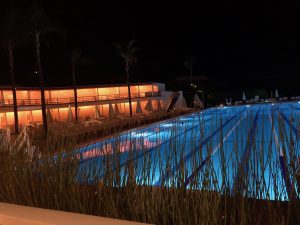 Dinner was a real treat.  I crossed the road to the Casino & Beach Club, recently completely re-done by Mr Warner, with the help of designer Peter Marino.  The 30-metre pool is probably exactly as it was when it was built, in 1937, for Hollywood stars weekending out of town. Now the 500 members, plus hotel VIPs, also have such delights as Tydes, a ship-like restaurant centered around a seafood raw bar.Over a glass of perfectly chilled Whispering Angel 2017, I listened to the raucous and happy conversations of big parties at tables around as I checked the menu. 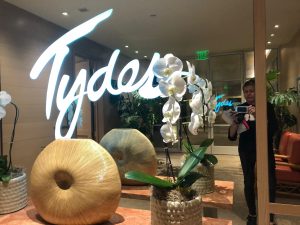 There are items by Leslie Durso, the vegan author and chef who actually spoke at the Forbes Travel Guide luxury symposium last week.  There are others chosen by Erik Anderson, the chef who will head the kitchens at Four Seasons Napa Valley when it opens mid-year.  I chose two of his dishes, albacore tuna tartare followed by olive oil-poached halibut, with a glass of a local, Grassini Articondo Happy Canyon 2014 Santa Barbara.  And in the morning, I breakfasted under a Bordeaux burner, outside on Bella Vista restaurant terrace, and listened to the ocean. This, I thought, is the perfect last memory of this luxury resort. SEE MY SUITE