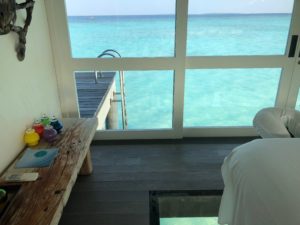 And then the gal was swept away from the luxury Four Seasons Resort at Landaa Giraavaru to see its latest baby. In 2016 the then-ten year old resort turned its uninhabited picnic island, 10 minutes away by speedboat, into a private island for those who want the absolute ultimate. There are eight full-time staff, who agree to nearly every whim of guests, who may number two, or may be as many as 16: this is buy-out only, $40,000 a night regardless of number of people, but you do get your own super-yacht thrown in. As well as having three separate multi-bedroom villas, there is a private spa, and gym. 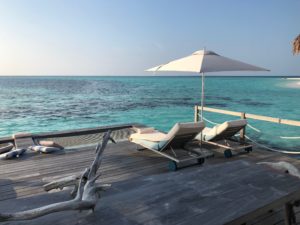 This certainly sounds the ideal venue for groups of friends, who can make as much noise as they want without upsetting any other guests. It has been booked by couples, who just want all the space à deux, and by family parties. (Personally I can see this working much better than SuperShe Island, a private island off Helsinki that a Californian management consultant, Kristina Roth, is making into a women-only retreat, which sounds absolutely ghastly. Apparently you have to become a ‘member’, buying into her idea, to stay there. At least in London they do allow men in, to dine, at Grace Belgravia, the women-only wellness centre next to Mosimann’s Club in West Halkin Street. Do not expect GirlAhead to become a SuperShe.) 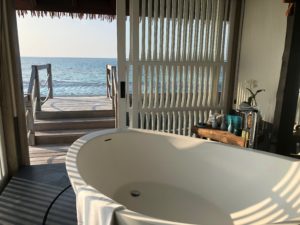 Bath on the private island

The whole of Voavah Island is two hectares, and each of the villas feels completely independent: you cannot see one from another. The designer is HPL’s Cedric Jaccard, who has done his usual trick of avoiding colour in favour of natural woods, sculpted driftwood and the like. The colour comes from the various blues of the ocean, and the sky. Lie in one of the egg-shaped bathtubs and look out at all that colour. HPL, by the way, is big throughout The Maldives – as well as Four Seasons it owns a Como plus Gili Lankafushi and others that are branded. It is also co-owner of Maldivian, the little sister of the mighty TMA floatplane operation. 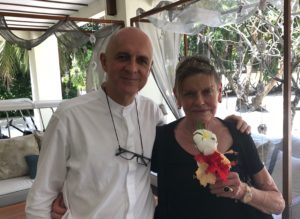 It was Armando Kraenzlin, Four Seasons’ Lucerne-born hospitality genius, who helped B.S. Ong, the ultimate owner of HPL, to put it all together. Now Armando Kraenzlin never stands still, and next up, or rather down, is a two-person submarine. The entire Landaa Giraavaru complex will be the first tourism entity to offer a private DeepFlight craft. There is always something new here, and yet they do not forget the basics. As you leave in a hotel boat for the three-minute ride to the pontoon to pick up a TMA floatplane back to Male airport, staff of this luxury resort, in padded pale blue ‘wetsuits’, offer water plus ear plugs and moist wipes, L’Occitane of course. AND NOW SEE MORE DEEPFLIGHT FOUNDER GRAHAM HUGHES’ PERSONAL CRAFT